Community comes together to keep Hollywood safe and clean.

HOLLYWOOD, Calif., February 17, 2019 (Newswire.com) - In a pleasant break from last week’s rain, it was clear skies Feb. 15, when dozens of volunteers, including members of a local Boy Scouts troop, gathered at the Church of Scientology Celebrity Centre and set out armed with rakes, brooms and shovels for the monthly “Hollywood Village” cleanup.

February’s cleanup marks the first anniversary of the initiative. Through the past year, volunteers have carted away hundreds of bags of garbage and protected local residents by disposing of more than 600 used syringes.

One of the greatest dichotomies of Hollywood is the encampments of $30-tents down the street from the million-dollar condos. An estimated 31,500 live on the streets of Los Angeles, and while the city and county work to create new housing and shelters, Hollywood Village volunteers try to fill the gap by holding monthly cleanups and handing out copies of The Way to Happiness, a common-sense moral code that can help people put their lives back on track, no matter the circumstances.

“Since the monthly cleanup began, we’ve noticed a definite change,” says Bari Berger, spokesperson for the initiative. “Encampments are doing daily cleanups. They tell us how much they appreciate our coming back month after month to help.”

The monthly cleanups are a partnership between the Church of Scientology, The Way to Happiness Foundation and the Los Angeles Police Department. The team gathers on the third Saturday of the month at 9 a.m. at the Church of Scientology Celebrity Centre International on Bronson and Franklin, where coffee and donuts are provided by Oaks Gourmet Market and Kettle Glazed Doughnuts. Then volunteers take off down Gower Street past Hollywood Boulevard and Viacom to Netflix on Sunset Boulevard and over to Vine Street, covering all points in between.

“We are proud this initiative has grown so much over the last 12 months,” says Berger. “Local businesses and volunteers are working together to help make this neighborhood a cleaner, safer, brighter place to live.”

Anyone wishing to help is invited to be part of the March cleanup. For more information, visit the Hollywood Village Facebook page or watch for their notice on Eventbrite. 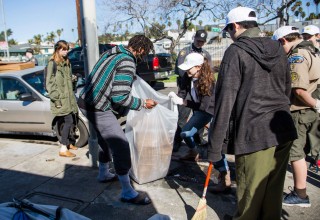 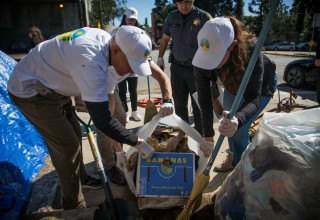 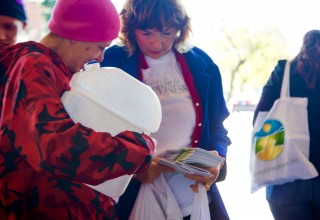 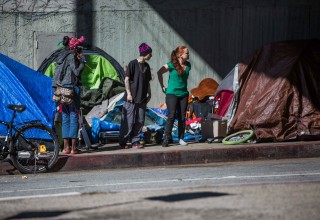