After beating various players, mysterious player becomes the global top player of this new season in Clash Royale with 3888 trophy. You may be curious about the champion or want to know more about his strategies and tips. Now KOPLAYER Network had the privilege of taking a personal interview with him. 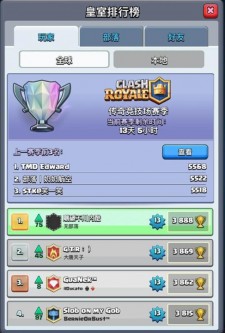 Fuzhou,China, July 15, 2016 (Newswire.com) - ​​​After beating various players, mysterious player, becomes the global top player of this new season in Clash Royale with 3888 trophy. You may be curious about the champion or want to know more about his strategies and tips. Now KOPLAYER Network had the privilege of taking a personal interview with him.

Q: How much have you spent in Clash Royale? And what is your expense rank in this game?

A: I spend approximately $15,000 in this game. Except handful legendary cards, all cards are max level. But it is just upper level in Clash Royale.

Q: What do you think about its in-app purchase design?

A: It is conscientious. Time or money, you have to spend one in Clash Royale. But I spend both of them. Maybe that’s the reason why I rank higher than some players.

Q: So far which battle impress you the most?

A: It has to be the first time I battle with Peisheng Zhong who is the boss of HKeSports club and one of the most famous player in Clash Royale. Although I lose with score 1:2, I still feel great.

Q: How much time do you spend on Clash Royale every day?

A: Several hours per day. I usually play this game with KOPLAYER in office hours and mobile device when off duty. KOPLAYER is an Android emulator on which you can play mobile games on PC. It provides me more smoothly and easier operation and video record. It could be my secret of success.

All tips come from experience. Let's give an example. Put Valkyrie behind. When the Elixir bar is almost full, use Hog Rider to push Valkyrie go forward. Then add Musketeer and poison. This set is nearly complete. This is mainly based on calculating both sides' Elixir usage. And Miner based set is particular about Elixir and counterattack. Here I focus on the all-stars set which restrains lightning, Fireball and Hog Rider. I use this set to get 4900+ trophy. But it shouldn't be generalized. It depends on your skill, timing and turns. Some players, who has no Inferno Tower, become nervous while facing all-stars set. But it is not a big issue. If Prince go forward firstly, then put Cannon in another side and some cards with less Elixir usage in middle. But if Dark Prince go first, put Cannon in middle and less Elixir usage cards in another side.

Some units, like Cannon and Valkyrie, don’t conflict with Knight. For example, if you don’t beat Knight in his first attack, don’t dispatch Cannon in middle. You’d better put Cannon close to Knight to solve it. If your Elixir is not enough, put Cannon with one tile distance in beveled front of tower. This will reduce many damages. But be careful. Don’t forget to calculate your rival’s Elixir and cards.

As for P.E.K.K.A, you should prepare Fireball if you have Inferno Tower. Fireball and Inferno Tower need to be prepare at same time to welcome Minion Horde. Don’t dispatch other meaningless cards. And less Elixir usage cards can be used to remit P.E.K.K.A. After P.E.K.K.A kills Inferno Tower, dispatch less Elixir usage cards to distract P.E.K.K.A and kill him with towers. In addition, Elixir Collector can be put in front of tower to reduce damage. P.E.K.K.A will be killed with no chance to attack. Or you can activate King’s Tower in advance to keep Arena Tower save.

All in all, the most important things are calculating Elixir, counterattack and predict.

Well, ace always has many tips to share. But it’s better to watch his combat to learn more tips. As we have mentioned above, all tips come from experience.

KOPLAYER is an Android emulator for PC that enables all Android games and apps to run smoothly in Windows systems.

KOPLAYER is an Android emulator for PC that enables all Android games and apps to run smoothly in Windows systems.