City of Miami Mayor Francis Suarez, as president of USCM, held a conference call with Mayor Vitali Klitschko of Kyiv, Ukraine, to discuss the most expedient way to provide assistance to the ongoing crisis in Ukraine 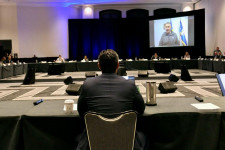 MIAMI, March 3, 2022 (Newswire.com) - The Office of the Miami Mayor reports that Mayor Francis Suarez, President of the United States Conference of Mayors, responded to an urgent call at the behest of Mayor Klitschko of Kyiv and held an impromptu conference at the onset of the US Conference of Mayors Winter Leadership Meeting.

"We want you to know that we stand with you in solidarity in this country. All of the Mayors of the United States…Vladimir Putin did not anticipate that his actions would unite our country." - Mayor Francis Suarez

Mayor Klitschko, alongside President Volodymyr Zelensky, is leading the resistance against the illegal Russian invasion into Ukraine from Kyiv. His main request was to increase pressure on Russia and ensure Vladimir Putin feels the gravity of the error he has committed against global democracy.

"We need to stop [cooperating] with Russia. We, together as the whole world, need to implement economic and political pressure on Russia. Then, the Russian population will put pressure on Mr. Putin."

Mayor Suarez is in the process of drafting a bipartisan resolution from the US Conference of Mayors to express the organization's commitment to amplify the voice of Ukrainians and people around the world who are united in calling for an end to this illegal war.

Source: Office of the Miami Mayor