City of Markham Says No to Drugs 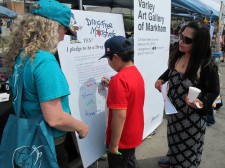 Markham, Ontario, July 1, 2016 (Newswire.com) - ​​Markham City Council proclaimed June 26, 2016, as the International Day Against Drug Abuse and Illicit Trafficking for the city of Markham. His Worship Frank Scarpitti, Mayor of Markham, presented the proclamation to volunteers from the Foundation For a Drug-Free World and the Drug-Free Marshals, a grass-roots youth drug education and prevention program sponsored by the Church of Scientology. Markham City Council members, York Regional Police, RCMP and York Region Fire and Emergency Services staff joined him on stage in support of this initiative.

In presenting the proclamation, Mayor Scarpetti thanked the Church of Scientology and the Drug-Free Marshals describing the initiative as “great promotion to make sure our young people are not taking drugs.” He also thanked the law enforcement agencies and all who work to keep communities across the province and in Canada drug-free.

International Day Against Drug Abuse and Illicit Trafficking coincided with the Taste of Asia Festival this year, and the mayor presented the proclamation from the festival stage.

One of the booklets distributed this year was the newly released The Truth About Synthetic Drugs, to raise the public’s awareness of the increased use of synthetic drugs. Effective drug education and prevention is the key to achieving the United Nations’ goal of achieving an international society free of drug abuse. According to the UN Office of Drugs and Crime (UNODC), “For every dollar spent on prevention, at least ten can be saved in future health, social and crime costs.”

Children visiting the volunteers' booth were invited to become a Drug-Free Marshal and were encouraged to take a pledge to live drug-free. This aligns with the United Nations message for the day—“Listen FIRST.” The UNODC aims to inform the public, particularly young people, about the harmful effects that drugs can have on their health. The aim is to increase support for prevention of drug use that is based on science and is thus an effective investment in the well-being of children and youth, their families and their communities.

The Drug-Free Marshals program is the youth component of the “Say No to Drugs, Say Yes to Life” campaign, an outreach group of the Church of Scientology of Toronto, open to all children who want to be drug-free. Scientology Founder L. Ron Hubbard wrote, “The planet has hit a barrier which prevents any widespread social progress—drugs and other biochemical substances. These can put people into a condition which not only prohibits and destroys physical health but which can prevent any stable advancement in mental or spiritual well-being.”

The Taste of Asia Festival promotes mutual respect and co-operation through the multicultural mosaic of Canada, creating harmony between various cultural groups. The annual multicultural event is hosted by the Federation of Chinese Canadians in Markham (FCCM), the Association of Progressive Muslims of Canada (APMC) and the City of Markham. Markham Mayor, Frank Scarpitti, not only endorses the festival, he is also the co-chair of Taste of Asia. The Drug-Free Marshals have participated in Taste of Asia since its inception.

For more information visit www.drugfreecanada.blogspot.com or The Foundation for a Drug-Free World website, at www.drugfreeworld.org

Volunteer Ministers From the Church of Scientology San Francisco Helping the Community Stay Well
Valuable tools to get through the pandemic safe and well
Scientology - Sep 16, 2020
Newswire