The City Opts in for NiMH Battery Technology and LoRa Capability 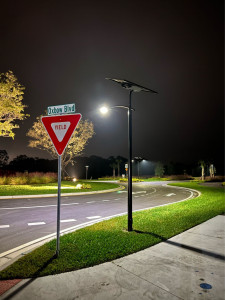 WOBURN, Mass., February 9, 2022 (Newswire.com) - Fonroche Lighting America is pleased to announce that the City of Los Angeles Street Lighting Testing and Evaluation Program has approved Fonroche's SmartLight specification for solar street lighting. This has special significance because of the city's scale and influence in outdoor lighting. Few towns and cities can support an in-house evaluation and testing program of their own, so many look to cities like the City of Los Angeles for leadership, rigorous evaluation, and best practices.

The city uses solar street lighting to save money by avoiding trenching and wiring costs. It also eliminates the threat of copper wire theft. In 2021, copper-wire theft cost the City of Los Angeles $3.9 million and left communities in the dark until the city could make repairs.

Hocine Benaoum, CEO, commented, "Fonroche Lighting America has installed over 150,000 SmartLight solar lighting systems worldwide. We look forward to working with the Los Angeles Bureau of Street Lighting to make similar inroads in Los Angeles and the rest of the United States."