Church of Scientology Nashville opened its doors to preservationists. Respect for the history and traditions of its buildings is part and parcel of the planning and renovation of Ideal Scientology Organizations. 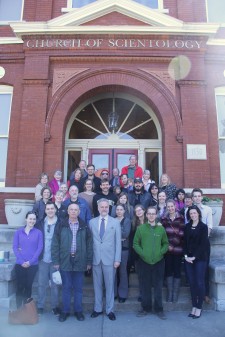 Built in 1898 in a similar style to the legendary Ryman Auditorium, the 36,000-square-foot Fall School building is a historic landmark. It served as a public school until 1970 and in 2007 the Church purchased the building and meticulously restored it, preserving its original features, such as:

"This church isn't just our home in Nashville, it is a building for the community, and it is a Nashville institution. This is why it is so important to us to keep it preserved for the future."

Rev. Brian Fesler, Pastor of the Church of Scientology Nashville

·      Two stained-glass pocket doors that were discovered in the renovation process. They had been concealed behind the walls for nearly a century,

·      The central three-story atrium that these pillars support.

Rev. Brian Fesler, pastor of the Church of Scientology Nashville, toured Historic Nashville members through the Church. “This church isn’t just our home in Nashville,” he said, “it is a building for the community, and it is a Nashville institution. This is why it is so important to us to keep it preserved for the future.”

Historic Nashville Board Member Connie Gee organized the walk-through. “We are thrilled with the stewardship of the building that the Church has given to this wonderful historic part of Nashville,”  she said. “Your attention to detail in keeping the integrity of the architecture and craftsmanship of the building is outstanding.  The repurposing of the school has worked very well to keep it alive for years to come.”

The Church of Scientology Nashville opened April 25, 2009. An Ideal Scientology Organization (Org), it is configured to service Scientologists in their ascent to spiritual freedom and serve as a home for the entire community—a meeting ground of cooperative effort to uplift citizens of all denominations.