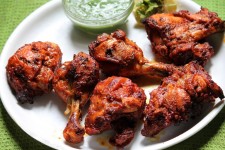 BOULDER, Colo., July 5, 2017 (Newswire.com) - Boulder, Colorado is ranked as the fourth healthiest city in the country, according to a study conducted by Wallethub's analysts in 2017. This represents the city's highest-ever finish and is a consequence of concerted efforts, made over the span of more than a decade, to foster a healthy lifestyle culture. One of the city's better-known entrepreneurs, Christina Inserillo has used this platform as a springboard to launch her latest exciting venture, Tandoori Nights, an Indian-styled Barbeque restaurant in downtown Boulder, Colorado.

The seed for this idea was planted way back in her mind in 2010 when she had embarked on a trip to India to attend a friend’s wedding. "I was fascinated by the whole concept of Indian tandoori food which was pretty much the highlight of my visit. I always sort of kept it on the back-burner of my brain, but never really got started on it since I was involved in other projects at the time. However, the last 2 years of my life have been devoted to Tandoori Nights, we have gone to great lengths to ensure everything is as authentic as can possibly be with our restaurant. We have imported equipment, herbs and spices from India, as well as hired experienced Indian chefs to see through our goal of providing this city with the best Tandoori experience!"

For those uninitiated in this exotic cuisine experience, the equipment Christina Inserillo mentions is known as a Tandoor, the most important fixture for this form of cuisine.

According to Inserillo, a Tandoor is a big, hollow, cylindrical clay or metal oven that is used in baking and cooking in South Asia and the Eastern bordering countries of the Middle East. With internal temperatures as high as 900 degrees Fahrenheit, it has evolved from using charcoal to generate heat to much safer alternatives like electricity or gas now.

"Most people who have tried Indian cuisine will have heard about Tandoori chicken, chicken tikka and Indian flatbreads like naan and roti, but we're more than just that. This city is diverse and its people follow different lifestyles that call for different dietary preferences and we are very accommodating of that. Not only do we serve an assortment of Tandoori meats, but we also provide an exotic variety of vegetarian Tandoori dishes. The bulk of India's population is vegetarian and to be honest, in all of my years living and traveling the world I've never seen any country's cuisine display such a staggering range of vegetarian choices to cater to that audience," said Inserillo.

Food cooked using a Tandoor is considered a healthier alternative to most mainstream cooking techniques. "The dishes are marinated first using seasoning, lemon juice, yogurt, oil, herbs and spices. These herbs and spices don't just provide an enhanced flavor; they are extremely healthy and beneficial to consume. For instance, turmeric is the most powerful herb on the planet at fighting diseases and is used as an anti-inflammatory and anti-depressant," said Christina.

She continued: "Clay cooking ensures minimal loss of the nutrients, moisture and important vitamins. It is essentially a form of grilling, which is a healthy way to cook using steam. This kind of food is ideal for people who have adopted or want to adopt a healthy lifestyle and consume delicious yet low-calorie healthy food.

"We take the whole 'you are what you eat' mantra pretty seriously, so we’re very generous with the young generation which is the future of this country. Our Thursday nights are exclusively college nights where the kids need to show a valid college ID to get in and they get a 30 percent discount," said Inserillo.

Christina has been very shrewd with the marketing and promotion for Tandoori Nights and has managed to generate quite a huge buzz around the opening of her new restaurant in the local community. She has tied up with local gyms, coffee shops and some of the top Fortune 500 companies in the area to spread awareness about the latest restaurant in town, and it seems to have worked like a charm. The hype around it has seen long queues outside the restaurant almost every night since its opening a week ago.

Paul Vinter, who has already become a regular at Tandoori Nights, cannot stop effusing with praise for the restaurant. Vinter said, "The food is ridiculously amazing, it melts in your mouth. They have very short wait times till they deliver food so that's great. I brought my daughter who's such a fussy eater and she just gobbled up all the Tandoori veggies like it was her business. And she never eats a single veggie at home!"

"I hope they keep the service as good as it is right now; it'll become a blockbuster in this city. My only complaint is I can't get to eat here on Thursday nights, which was jam-packed, to be honest. I crossed it on my way home after work and there was this huge bunch of young hipster kids all standing outside in line waiting for their turn to get in," he said.

Christina seems to have delivered yet again with her latest masterstroke. If Tandoori Nights maintains its strong and steady upwards rise, it might have the potential to extend out into other cities and become a successful restaurant chain in the near future.