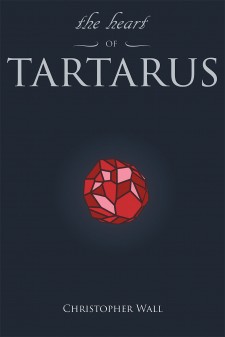 New York, NY, April 13, 2017 (Newswire.com) - Chris Wall, a breakout author, has completed his most recent book “The Heart of Tartarus”:  a gripping and charismatic tale that explores the current whereabouts of the ancient Roman Gods, and the one that has been left behind.

Chris Wall is a young New Englander with a love for mythology, history, and writing. Chris says that, “Since childhood, I was often off creating my own little worlds, from drawing comic books, to making animations, and finally into writing. I fell in love with mythology early in the seventh grade, and I had wanted to write something based within it ever since.”

Published by Fulton Books, Chris Wall’s book explores how each planet in the solar system was named for a Roman god, and by extension, a Greek god as well. Was this just a few ancient astronomers honoring the ancient gods . . . or was it something else?

Craig Driscoll, a forty-something-year-old history professor at Boston University discovers that it is the latter. The goddess Juno appears to him with a dilemma. The gods have taken to the heavens in a way no one could have predicted. They embodied the planets, and with them, their children did as well. This leaves Juno alone, without a planet of her own she cannot join her family, and so she points Craig to the deepest pit of the Underworld: Tartarus. Deep within is something that could help her create her own planet from scratch. Something that only Craig can reach, because he is the world's only living demigod. So Craig Driscoll, the atheist turned son of a god, travels where no mortal has ever set foot before, to the very heart of Tartarus.

Readers who wish to experience this engrossing work can purchase “The Heart of Tartarus” at bookstores everywhere, or online at the Apple iTunes store, Amazon, Google Play or Barnes and Noble.

Jennifer Groff's New Book 'My New Room' is the story of a sweet little frog who has to adjust to a brand-new room in a new house after her parents separate
Fulton Books - Sep 30, 2022

Nadine Davis' New Book 'The Grass Looks Greener on the Other Side' is a charming children's story about a curious cow who decides to find out what lies beyond her fence
Fulton Books - Sep 30, 2022

Lance Anderson's New Book 'Cop Stories' is a compilation of true and thrilling stories experienced by the author during his varied career in law enforcement
Fulton Books - Sep 30, 2022