The Asian power is making a big push to acquire assets in wind and solar power, plus vital electric transmission and distribution networks; China has committed billions of dollars to lithium projects in Latin America, a region possessing more than half the world's reserves of this strategic metal 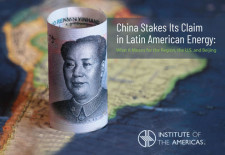 LA JOLLA, Calif., February 10, 2021 (Newswire.com) - China is broadening its presence in Latin America's energy and strategic minerals sectors, posing challenges to the regional countries themselves as well as to the United States, according to a new white paper published by the Institute of the Americas (IOA), an independent, nonpartisan organization based in La Jolla, California, that focuses on inter-American affairs.

In recent years, the Asian superpower has sharply increased its takeovers of major projects in electric power transmission and distribution, renewable energy and lithium, even as its other investments in the energy sector have declined. For example, in 2020 Chinese M&A deals in Latin American energy sectors surged, reaching $7.7 billion, or a quarter of all Chinese acquisitions worldwide, the study said.

Between 2000-2019, China made investments and loans of more than $58 billion in regional energy sectors, with most going to oil and natural gas projects, followed by renewable energy.

From acquisitions of Mexico's largest private renewable energy firm and clean energy projects in Colombia to takeovers of major electric transmission and distribution companies in Brazil and Chile, the report unpacks this new and less well-known facet of China's economic and financial connections in Latin America. China is furnishing countries across Latin America and the Caribbean with some of the world's most advanced technology in solar and wind power systems at highly competitive prices, thus gaining an edge on other international competitors.

The new IOA report, entitled "China Stakes Its Claim in Latin American Energy: What It Means for the Region, the U.S. and Beijing," also raises questions regarding the real debt Latin American and Caribbean nations owe China. Since most details of Chinese financial arrangements with regional countries are undisclosed, some researchers believe that total debt is much higher than levels reported by the World Bank, the International Monetary Fund and other organizations.

In Ecuador, Chinese oil companies operating in part of the Amazon rainforest have been the target of protests by indigenous groups, like the Sápara and Kichwa, who charged that the companies are damaging the Amazon and circumventing Ecuadorean laws. To reduce China's influence, Ecuador signed an agreement with the U.S. International Development Finance Corp. that would help pay off its China debt and obtain new development loans.

China also has aggressively pursued new Latin American investments in lithium, a strategic mineral necessary for lithium-ion batteries used in cell phones, electric vehicles and the military/aerospace industries. China's Tianqi Lithium committed $4.1 billion to buy a 24% stake in a Chilean company, SQM, that holds an important share of international lithium reserves. China has other major investments in Bolivia, Argentina and Chile. These three countries - plus Peru - possess more than half the world's known lithium resources.

And in Argentina, Chinese investments in hydroelectric dam projects drew the ire of Argentine business groups due to mandates that only Chinese materials and support systems be used.

The Biden administration has an opportunity to reinvigorate U.S. relations with Latin America and the Caribbean. By using its own international financial and aid agencies, working with multilateral development banks, and with U.S. companies, it can assist regional governments to attract new, private-sector investments and credits for their priority projects - especially in clean energy, infrastructure and strategic minerals like lithium.

As it did recently with Ecuador, the U.S. can help Latin American and Caribbean governments pay down Chinese debt and secure new sources of financing from a good neighbor more closely aligned with regional goals, such as care of the environment, good governance and use of local labor and manufactured goods in development projects.

The Institute of the Americas will present key report highlights on Thursday, Feb. 11, 2021, at 9 a.m. PST as part of its Hemisphere in Transition Webinar Series.  The virtual session will be re-broadcast on UC-TV.  To register, visit: https://www.iamericas.org/events/report-launch-event-china-latin-american-energy-region-us-beijing/

Link to full report in English

About the Institute of the Americas:

Established in 1981, the Institute of the Americas (IOA) is an independent, nonpartisan Inter-American institution devoted to encouraging social and economic reform in the Americas, broadening communication and strengthening political and economic relations between Latin America, the Caribbean, the United States and Canada. Since 1992, the Institute's Energy & Sustainability program has played a crucial thought-leadership role in shaping policy discourse and informing policymakers and investors on the most important trends in the energy sector.

The Institute continues to serve as an honest broker between public and private sectors across Latin America, helping to forge a constructive dialogue on the issue of clean energy transitions and emerging economic opportunities derived from renewable energy deployment.  The Institute is supported by corporate and individual donors who participate in its conferences, workshops and multi-year projects and programs.  Funding is also provided by the generous support of foundations and U.S. government agencies.

Source: Institute of the Americas 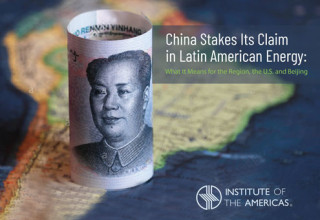 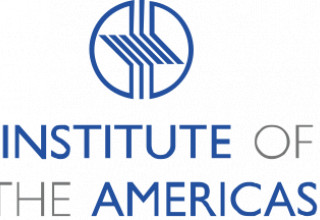 About Institute of the Americas

The La Jolla, California based Institute of the Americas (IOA) is an independent, nonpartisan Inter-American institution devoted to encouraging social and economic reform in the Americas.

Thought Leaders Gather for Forum on Central American Security & Economic Prosperity
The forum will examine Central America's Northern Triangle security, governance and socio-economic challenges, as well as recent commitments by the Biden Administration and multilateral development banks for expanded aid to the region.
Institute of the Americas - May 25, 2021