Children From 42 Countries to Combat Climate Change, Hunger, and Other Current Issues at 'Children's UN'

80 children have been selected from a field of 200 applicants worldwide. They will meet in online workshops in spring and summer before presenting their findings in September at a summit in the Capital of Children, Billund in Denmark. The ideas will be presented to the world leaders at the UN General Assembly in New York City. 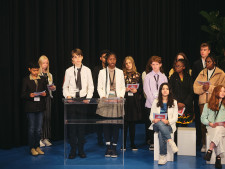 BILLUND, Denmark, May 24, 2022 (Newswire.com) - Once again, the world's children will gather to voice their opinions on some of the most important issues at hand at the Children's General Assembly. September 13 through 15, 80 children from 42 countries of residence are invited to take part in a three-day summit in the Capital of Children, Billund in Denmark.

One of the participants this year is Olivia Jean Bahadur from Canada. She's looking forward to sharing her ideas with children from all over the world, and she hopes to make the world leaders - and all of us - listen.

Another participant, Aumake Musonda Aaron from Botswana, is worried about how we as a society judge each other.

"I would change the leaving behind of children in most of the national decision making as children's views are not taken into consideration when countries make decisions at a national level. For I truly believe that you are never too young to make a difference," she says.

The assembly results in a political catalogue and a manifesto that all children have to sign.

Creativity and passion
From April to September, the children will take part in 48 online-based workshops on their interests and geography. The workshops are led by skilled facilitators and are based on the core values of co-creation and learning through play.

Among the themes are "Who we are, and how we express ourselves." The first workshops took place during April 24 and 25.

"We're really happy to have such a diverse field of participants so that we can reflect the children from all parts of the world. Compared to last year, we have more participants from developing countries and from a wider range of countries in general. From the first workshops we're blown away by the creativity and passion that the future generation holds, and we can't wait to see what they have to tell the world leaders in the coming months," says Charlotte Sahl-Madsen, at Capital of Children.

April-September: The participants will be invited to online meetings and workshops on different topics.

August: All the ideas are gathered in a catalogue to present them to each other as well as world leaders.

September 13-15: The participants will meet in Billund, Denmark, to present and discuss the ideas and solutions.

Participants by country of residence:

The Children's General Assembly is developed by the Capital of Children Partnership, formed and qualified with a group of children from Billund.