Volunteers travel to Atlanta to raise awareness and rescue survivors 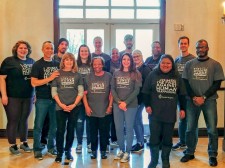 ATLANTA, February 3, 2019 (Newswire.com) - As the leading sporting event in the United States, The Big Game draws the attention of the nation—whether you’re watching the game, or just tuning in for the commercials and half-time show. As one of the biggest travel events in the country, thousands of people have converged on Atlanta for NFL championship week. There is a dark side to the increased tourism, however: not all those people attend freely, with an uptick in tourist demand correlating with an uptick in sex services and therefore sex traffickers looking to profit.

Rahab’s Daughters is an anti-trafficking organization founded by a trafficking survivor; they specialize in the rescue, rehabilitation, and reintegration of survivors. As a suburban Chicago based organization, each year, they lead a mission trip to the Super Bowl city to raise awareness, prevent trafficking, and rescue survivors.

This year, Rahab’s Daughters has partnered with three other organizations from Illinois & Wisconsin to perform activities in the Atlanta metropolitan area during the week leading up to The Big Game: the Convergence Resource Center (CRC), which provides client-focused, trauma-informed care for trafficking survivors, including education and training for community organizations and service providers; the Amateur Athletic Union (AAU), which is one of the largest nonprofit, volunteer-run, multi-sport event organizations in the world, dedicated exclusively to the promotion and development of amateur sports and physical fitness programs; and Focus Martial Arts, which uses martial arts to increase students’ confidence and fitness levels while learning self-defense and important life skills not always taught to children and adults.

As NFL championship week kicked off, Rahab’s Daughters hosted a self-defense training, open to the public. Sponsored by the AAU, Focus Martial Arts offered their signature empowerment program, Fight like a Girl, Fight for a Girl, teaching a combination of awareness, prevention, and technique. This training was designed with the prevention of human trafficking in mind, the interest in the training was astonishing, with 57 registered.

The CRC worked in conjunction with teams on the ground by hosting a call center to reach out to 1,900+ ads found on adult entertainment websites for the Atlanta metro area this week. All in all, over 1,500 calls were made, and over 1,400 texts sent, driving local rescue efforts.

A team of volunteers traveled from all over the country to Atlanta to be a part of the outreach activities. They were deployed to airports, bus stations, strip clubs, massage parlors, brothels, and on the streets. Passing out messages of hope with roses, tissues, and camera covers to prevent catfishing while raising general awareness and educating the public on red flags to detect human trafficking. Over 1600 roses were handed out.

This powerful message of love may not always lead to an immediate intervention, but time and again Rahab’s Daughters volunteers have witnessed how this seed planted leads to a call in the days, weeks or even months to follow, setting the wheels of rescue, rehabilitation, and reintegration into motion.

The results of the combined efforts of the Safe Atlanta coalition to which Rahab’s Daughter’s team and partners contributed has already been staggering: 40 arrests made, up from the 33 announced by the Secretary of Homeland Security Kirstjen Nielsen on Wednesday. A number of women and even more children have been rescued (the details remain undisclosed for their protection).

Wondering what you can do to end human trafficking? If you see something suspicious, don’t hesitate to contact Rahab’s Daughters at 1-833-4NEWDAY or (833) 463-9329, or at rahabsdaughters.org. You may also call the national human trafficking hotline at (888) 373-7888.

Rahab’s Daughters is a faith-based Suburban Chicago nonprofit dedicated to ending human trafficking, or modern-day slavery. They offer comprehensive prevention and rescue-to-reintegration solutions to survivors across the United States. Visit their website at RahabsDaughters.org.

A 501c3 Not for Profit that offers prevention as well as a rescue - reintegration services to stop Human Trafficking and save survivors.