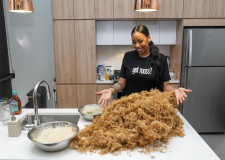 NEW YORK, May 4, 2021 (Newswire.com) - Chef Rah Virgo, the self-proclaimed "Sea Moss Queen", is making waves with her soon-to-be franchised business, Moss by Rah. As the Martha Stewart of all things sea moss, her established business soared to new heights during the heart of the pandemic.

Sea moss has been used as a natural remedy to certain illnesses since the 1800s. Early studies suggest sea moss may indeed have health benefits. "Sea moss can help with everything from your skin to immune systems," says Rah, who has morphed this famous organism into a sea moss line that consists of hair & skin products such as a glow mist, loc mist, hair growth serum, a sea moss butter for the skin, and lavender soap. In addition to the body products, Ms. Virgo also has several tasteful and flavorful sea moss smoothies, lemonades, tea, applesauce, and more.

"I don't go through a vendor, and that's what makes my products stand out from the rest.

"The sea moss I use is produced, harvested, and shipped to me directly from my family-owned & operated business in Jamaica," states Rah.

Ms. Virgo is the head Chef for the entire BK Lobster franchise which encompasses over 23 locations within seven different markets. The menu at King of Diamonds of Atlanta, which is owned by famous hip-hop artist Akinyele, is also a part of the BK Lobster dynasty. When Rah is not chef 'in it up, you can also catch her catering events for athletes, influencers, and celebrities.

At the top of 2022, Ms. Virgo plans to franchise out her sea moss business. "There are several juice bars around the world; however, I will have the first sea moss-based juice bar," she smiles.

To keep up with Rah Virgo, log onto www.mossbyrah.com for more information.