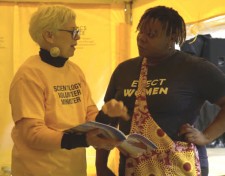 BATTLE CREEK, Mich., June 24, 2019 (Newswire.com) - Each year, Battle Creek holds its Juneteenth Family Day Celebration. Families travel from throughout Calhoun County to join in the fun. The Volunteers Ministers of the Church of Scientology Battle Creek were on hand to provide help to the community.

Juneteenth is term combining “June” and “19th” — the day it is celebrated. It commemorates the end of slavery in the United States. Although Lincoln’s Emancipation Proclamation preceded it by two years and the Civil War ended in April, it wasn’t until June 19th that the news reached Texas, the westernmost Confederate state, making it official throughout America.

Volunteer Ministers provided one-on-one help to visitors to their bright yellow tent. With their motto that no matter the difficulty, “something can be done about it,” they are trained in spiritual technology that addresses life’s many difficulties. Their skills include resolving relationship problems, study difficulties, drug or alcohol dependence and job stress. Training on these skills is available free of charge on the Volunteer Ministers website.

The Volunteer Minister program is a religious social service created by L. Ron Hubbard in the mid-1970s with the mandate to help “on a volunteer basis by restoring purpose, truth and spiritual values to the lives of others.” Hubbard described the Volunteer Minister as a person who “does not shut his eyes to the pain, evil and injustice of existence.” Volunteer Ministers are trained to help others achieve relief from life’s travails and gain new personal strength as well.