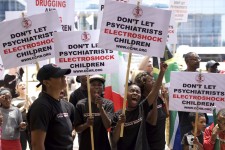 South African children are prescribed Ritalin and other highly dangerous psychotropic drugs at a rate that exceeds even those in America. Yet Ritalin, a Schedule II drug (a classification for the most addictive substances in medical use, including morphine, opium, cocaine and codeine), has been found to be even more potent than cocaine. And despite a 2005 "Drug Alert" from the South Africa Medicines Control Council about antidepressants putting adolescents at increased risk of suicide, children and adolescents are still prescribed the drugs.

CCHR is demanding the WPA put an end to the destructive practice of labeling and drugging children that has resulted in some 20 million children and infants worldwide, being prescribed psychotropic drugs.

The WPA's Congress is sponsored by Pfizer and Janssen, pharmaceutical giants that rake in billions from marketing psychotropic drugs. These companies benefit directly from psychiatry's labeling and prescribing their drugs to this "market," now also consisting of toddlers, preschoolers and babies. These same drug companies are embroiled in litigation stemming from these practices:

The Children's Rights march and rally culminated with the opening of CCHR's Psychiatry: An Industry of Death Traveling Exhibit at the Castle of Good Hope in Cape Town. By raising awareness and educating hundreds of thousands on the harsh realities of psychiatric abuse, CCHR's traveling exhibits spearhead a global movement to clean up the entire field of mental health and bring psychiatry under the law.

Citizens Commission on Human Rights is a mental health watchdog founded in 1969 by the Church of Scientology and Dr. Thomas Szasz, a renowned professor of psychiatry. With its worldwide corps of activists, CCHR is responsible for the enactment of laws outlawing involuntary commitment, brutal shock treatment and widespread enforced drugging. CCHR has also contributed to protecting and saving the lives of millions of people by exposing and jailing thousands of criminal psychiatrists and blowing the whistle on psychiatric crime.