Carl A. Robertson, Sr.'s New Book 'Titans of Corruption and Other Poems' is a Galvanizing Collection of Verses Sharing the Author's Viewpoint on the State of Our Nation 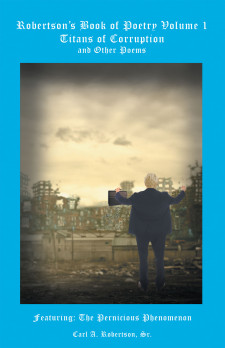 LAWTON, Okla., September 1, 2021 (Newswire.com) - Fulton Books author Carl A. Robertson, Sr. served within the US Navy during the early 1970s, and it was during those years when he started writing poetry. He has just completed his most recent book "Titans of Corruption and Other Poems": which is a gripping manuscript delving into how systemic racism and other inequalities within America hurts all American citizens no matter the color of their skin. Robertson speaks about the poor and powerless who are always being taken advantage of by the manipulations of the so-called equal opportunities contemplated and transcribed by wealthy people of power and prestige.

Although disparities against the underprivileged need to change, Robertson similarly writes that, "Titans of Corruption denotes that 'No Oppressor will ever allow those who he once fully oppressed, to ever become equal to himself; and his laws of equality will always be full of deception against the poor no matter their color.' This is especially so for most Black, Brown, and poor white communities of the United States, whose trust for redemption and hope are still placed highly within their religious faiths."

Published by Fulton Books, Carl A. Robertson, Sr.'s book is an insightful and stunning piece, and it is Robertson's hope and dream that "Titans of Corruption" will inspire all open-minded American citizens to consider: whether fair unbiased equality really exists within present-day America, and if not; what is actually causing the divide amongst our people(s) and society since the poor of this nation does not have the power or wealth to guide this vast country into any specific types of dislikes or wide-ranging directions?

Readers who wish to experience this great work can purchase "Titans of Corruption and Other Poems" at bookstores everywhere, or online at the Apple iTunes store, Amazon, Google Play or Barnes & Noble.

Dr. Thomas Newman's New Book 'Friends in the Garden' is a Detective Adventure of a Boy and His Dog as They Search for the Culprit of the Missing Vegetables
Fulton Books - Oct 21, 2021

Eric T. Smith's New Book 'Driving Around' is a Heartwarming Adventure That Highlights the Significance of One's Youth to Their Whole Being
Fulton Books - Oct 21, 2021
Newswire