Can We Reverse Alarming Trends in Drug Abuse?

Roundtable at the Church of Scientology of Los Angeles examines public health crisis from marijuana abuse. 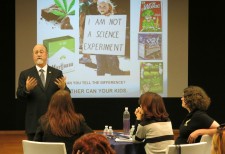 Los Angeles, California, May 26, 2016 (Newswire.com) - Members of the Foundation for a Drug-Free World hosted a roundtable discussion with John Redman, Executive Director of Californians for Drug Free Youth (CADFY), at the Church of Scientology Los Angeles. Exploring public health issues related to today’s marijuana, topics included increased potency, acute and long-term effects on the body, and the public health crisis and social cost of increased marijuana use.

The roundtable reviewed alarming statistics from the state of Colorado where average past-month use of Marijuana for youth ages 12 to 17 increased 32 percent from 2008 to 2013, according to the SAMHSA National Survey on Drug Use and Health 2012 and 2013.  There has also been a 34 percent increase in drug-related suspensions and/or expulsions during this same period.

"For every dollar spent on prevention, at least ten can be saved in future health, social and crime costs."
United Nations Office on Drug and Crime

“We have a profound responsibility to support sound drug policy that will explicitly protect our youth,” stated Redman.

According to the U.N. Office on Drugs and Crime, the use of cannabis has continued to rise. Evidence suggests that more drug users are suffering from cannabis use and that cannabis may be becoming more harmful, as reflected in the high proportion of persons seeking first-time treatment in several regions of the world.

The Church of Scientology is dedicated to eradicating drug abuse through education.  According to the United Nations Office on Drugs and Crime, “For every dollar spent on prevention, at least ten can be saved in future health, social and crime costs.”

Community Alliances for Drug Free Youth, CADFY, is a nonprofit organization that works at state, national and international levels to encourage policies that target illicit drug use and related problems, promote research-based prevention strategies and programs, and create initiatives that support drug awareness and education.

The Church of Scientology Los Angeles makes its conference rooms and seminar rooms available to like-minded groups and hosts seminars, roundtables and open-house events on topics of importance to the community.