Founders and employees welcome the end of marijuana prohibition as they prepare for increased demand for legal cannabis on January 1st. 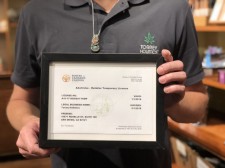 SAN DIEGO, December 15, 2017 (Newswire.com) - Torrey Holistics today announced that California has chosen the collective to be the first approved Adult Use marijuana dispensary in the state. Thousands of businesses applied for the license prior to the state's awarding of the first license yesterday. Granting of the license means that as of January 1st, 2018, Torrey Holistics will be legally permitted to temporarily sell marijuana to adults 21 years of age and over without the medical recommendation of a physician, as was previously required in California.

"We are honored and grateful that the state has placed its faith in Torrey Holistics," said founder Tony Hall, who took a chance starting the dispensary with a college friend in 2015. Since then, Hall has enlisted a top-tier management team with the intention of taking the lead in the industry as challenges such as banking compliance and regulation of legalized marijuana have emerged. “As proponents of regulation, we did our best to get out in front of the changes ahead and to be diligent during the licensing process, but we hope our long-standing commitment to being San Diego's safe and reliable choice for legal cannabis spoke well for us. Now that our Adult Use license has been granted, we will turn our focus to job creation and expansion to accommodate demand in the region.”

For now, Torrey Holistics is busy preparing staff and store shelves for the increased demand expected for cannabis products on January 1. The store currently carries over 400 products and serves over 10,000 medical marijuana patients. According to Torrey Holistics Marketing Director, Ruthie Edelson, "We are planning a New Years Day celebration at the store so we can finally enjoy this momentous time with all of San Diego."