California Small Business Defaults Up in February, Borrowing Down 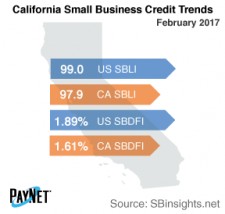 Chicago, IL, April 13, 2017 (Newswire.com) - Data published by PayNet show that the percentage of small businesses defaulting on existing loans has increased in California and the level of borrowing activity fell in February 2017. The data suggest that economic conditions in the state may substantially weaken.

Registering at 97.9, the PayNet Small Business Lending Index (SBLI) for California dropped 1.1% from the previous month's state level and was 1.1% beneath the national SBLI level this month. Small business borrowers are being cautious and holding off on new investment.