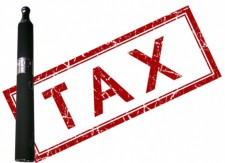 Harrisburg, PA, January 19, 2017 (Newswire.com) - ​​​​​The Pennsylvania Vape Association will be holding a rally in the state's capitol to oppose the 40% vapor tax placed on businesses in the commonwealth.

Now an alarming number of former employees are out of work and seeking unemployment benefits, previously occupied retail space has been vacated, and shop owners have filed for bankruptcy.

As a result of pressure to get the 2016-2017 PA budget passed, the Pennsylvania vapor industry was taxed 40% on products in their stores. It is estimated that 100 vapor businesses in 2016 closed (approximately 1/3 of the state industry) due to this retroactive tax. Now an alarming number of former employees are out of work and seeking unemployment benefits, previously occupied retail space has been vacated and shop owners have filed for bankruptcy.

The Pennsylvania Vape Association (PVA) has been in contact with numerous owners who have indicated plans to close their doors in 2017. This tax went into effect on October 1st 2016 which required businesses to pay taxes on already owned inventory.

Representative Jeff Wheeland and House co-sponsors introduced House Bill 2342 in an attempt to address this serious issue effecting so many small business owners. Unfortunately, the bill expired due to lack of legislative days in 2016 and inadequate number of readings by the House.

In 2017, both Senator Bartalotta and Representative Wheeland will be reintroducing legislation to reduce the tax from 40% to 5 cents per milliliter on e-liquid and remove it from the PA budget definition as tobacco. Currently these measures have continued support both in the House and Senate in hopes that it will save jobs and small businesses here in the commonwealth.

The Pennsylvania Vape Association will be holding a rally in opposition to the 40% tax that has been placed on vapor businesses in the commonwealth of Pennsylvania. We encourage press and concerned public to attend this rally. Most speakers will be available for one on one interview after the conclusion at 11:30 a.m.

Other speakers and industry business TBA

Pennsylvania Vape Association is a registered 501c(3) located in Pennsylvania