Building the First Chinese-Israeli Startup, One Line of Code at a Time

LeapLearner, a China-based ed-tech startup, represents the first global venture built from the ground up by Chinese and Israeli co-founders 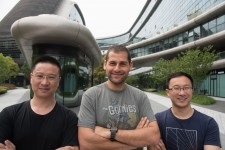 Shanghai, China, April 25, 2017 (Newswire.com) - From Chinese private equity funds investing in Israeli start-ups, to Israeli tech leaders designing solutions for China's growing economy, in recent years, there has been a significant amount of growth in Chinese-Israeli collaboration. However, we have yet to see a company born of true collaboration between Chinese and Israeli entrepreneurs - until now.

In 2016, Israeli serial entrepreneur Ami Dror and renowned Chinese mathematics educator Aaron Tian co-founded LeapLearner, a Shanghai-based education company. LeapLearner's disruptive online/offline platform is designed to prepare kids for the future by providing them with critical 21st century skills like innovation, self-learning, problem-solving, creativity and adaptability. With its eye on our robot-driven, technology-based future, the company teaches kids as young as 5 years old how to code by hacking, building and creating their own video games. Dubbed the "language of the future," Dror and Tian see code as more than just a way for students to interact with computers. LeapLearner has transformed the process of learning how to code into a means of strengthening children's innovation skills and problem-solving abilities - all while improving their mathematical abilities and English-language fluency.

Ami's own experience coding as a young child enabled him to become a self-learner and leap from his modest Jewish Orthodox upbringing in southern Israel to his successful career as an international serial entrepreneur and "father" of consumer 3D products. Like Ami, his co-founder Aaron comes from humble beginnings and leveraged his determination to transform his small-town life as the son of Chinese rice farmers into his status as one of the most renowned, award-winning math teachers in China.

The case for building a Chinese-Israeli education company is a both comprehensive and convincing. Chinese students are ranked best in the world in international tests while Israeli kids are known for their exceptional innovative and problem-solving skills. China has a strong culture of education and, historically, Chinese families have used vast percentages of their resources at all income levels to ensure that their children were highly educated. Israel, in addition to having the second-largest innovation hub in the world (after Silicon Valley), is also home to globally renowned academic institutions and the second highest percentages of college graduates. China was recently ranked best for developers in the world, while Israelis and Jews around the world comprise over 20% of the world's Nobel Prize Laureates. Where Israelis excel in core disruptive technologies, China outshines the world in its ability to scale and reach mass production.

In creating this multicultural startup, Dror and Tian are able to leverage the unique advantages of both Israel and China's traditional educational principles and practices, as well as their present-day technological expertise. Thus, instead of following in the footsteps of countless Israeli entrepreneurs who chose to build their companies in Israel or the U.S., Dror chose to join forces with Tian in Shanghai and establish the first large-scale Chinese-Israeli startup company. They are confident that the company's success will make the case for the power of cultural diversity, and specifically the potential of Chinese-Israeli co-founded ventures.

"Our vision is for LeapLearner to be the platform where kids learn to harness the power of code in order to be innovative and realize their dreams," said Tian. "Whether you want to be a philosopher, doctor, lawyer, artist or banker, you must be literate in the language of the future," concluded Dror. Thus far, the company has raised US$ 5M in seed investments, and is operating in stealth mode with a team of 40 people ahead of its public launch in late May 2017.

LeapLearner is a cutting-edge education platform that aims to cultivate self-learning and 21st-century skills among students worldwide and prepare them for the world of tomorrow.

Can 1000 Kids Code a Video Game Together? Absolutely.
Ed-tech startup LeapLearner brings together more than 1000 kids to create and code the video game "FrogLeap" in less than 4 days.
LeapLearner - Jul 10, 2017