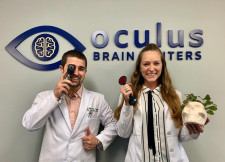 The couple, who’ve practiced functional neurology for the last four years and opened this practice in the heart of Mission Valley in September 2019, offer patients brain-based, drug-free solutions to correct neurological conditions relating to diminished function such as migraine, dizziness and chronic pain, among others.

Oculus Brain Centers is a one-stop-shop for patients looking for alternative approaches to healing through identification of dysfunctional neurological systems.

Trained to detect subtle changes in the nervous system, Drs. Barbakoff and Terrano are often able to detect conditions early on, before they become pathological.

“All the questions I had for why therapies worked for some, but not others, were answered by functional neurology,” Barbakoff said.

Guided by the most current research and state-of-the-art technology, the pair addresses the four pillars of the migraine condition: neurological, musculoskeletal, hormonal, and dietary aspects.

At Oculus Brain Centers, patients are educated on the difference between something that triggers a migraine, such as diet and stress, versus a root cause like neurological dysfunction in the brainstem, which is thought to be genetic.

“A common way to say it is, genetics loads the gun but the environment pulls the trigger,” Barbakoff said. “Environmental factors, which can be influenced by several lifestyle changes, may alter genetic expression of a disease process, such as migraine.”

Patients that are enrolled in the Oculus Brain Centers migraine program see consistent improvements in the frequency, intensity, and duration of their migraine episodes. Patients are then given the tools to continue their progress at home, so they can become independent long term.

“Our approach is to fix what we find,” Barbakoff said. “We identify areas of the brain that are dysfunctional and correct them, rather than using medication. To achieve great results, we adapt our approach to each patient.”

Oculus Brain Centers’ staff is compassionate and dedicated to helping patients feel and function better so they can live their best lives without pain.

“Our patients keep us engaged and motivated as we strive to serve them to the best of our ability,” Terrano said.

About Community Associates and Modern Press