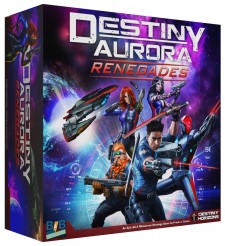 Los Angeles, CA, November 22, 2016 (Newswire.com) - From the Producer of Star Trek: Renegades and Six Gun Savior and published by B&B Games and Destiny Horizons, comes a board a game of epic proportions. Based on the novel series of the same name, Destiny Aurora: Renegades is one of the first games in existence that gives players the opportunity to not only play missions on the surface of exotic planets, but also creates simultaneous dogfighting scenarios in space. Player ships may also be boarded by enemy crews where hostages may be taken and ships may be seized.

This exciting, new game was play-tested over the past eight months privately and at conventions, including Gen Con. The game comes with 24 unique, highly detailed figures including four oversized ship figures as well as over 30 board tiles that make up both the space board and the planetary surface so no two games will ever be the same.

Choose your five crewmembers and place each of them at the ship's operating stations: Navigation, Weapons, Communications, Engineering & Command. Once all players agree on a mission, players will then choose their Landing Party of 1 to 3 characters, leaving the remainder on the ship. Players must strategically choose their Away Team or they might end up in unfavorable situations such as having their medic running their ship's weapons system where they may do little to no damage to their enemies.

The core game consists of sixteen different missions, which culminate into three possible "Epic Endings." On the planet surface, your Away Team may be faced with combating vile enemies, villain commanders and indigenous creatures.

Number of Players: 1 to 4 players choose between two opposing factions: the mercenary, fortune-seeking Renegades and the badge-wearing Coalition, hellbent on bringing them to justice. Playtime: approximately 90 minutes Age: 12+.

Kickstarter Progress: After 14 days, the game has almost doubled its goal on Kickstarter with over 600 donors pledging over $57,000 with the third stretch goal soon to be unlocked.

We publish board games that we and other game designers develop.