Visit Browardgop.com to view the Voter Guide for the August 18th primary. 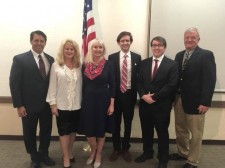 FORT LAUDERDALE, Fla., July 31, 2020 (Newswire.com) - ​​​​​​​​​​​​The Republican Party of Broward County has issued a Voter Guide for the Aug. 18 primary. Recommendations include judges, clerk of the court, school board, and more.

With absentee ballots already hitting mailboxes, voters are currently making decisions that will impact the outcome on Election Day. Early voting begins Aug. 8 and continues on until Aug. 16.

The guide even includes Frequently Asked Questions such as:

Find out the answer to these questions or see recommendations on who to vote for. View the Broward GOP Voter Guide. Voters with serious concerns should also consider contacting the Broward Supervisor of Elections.

"Oftentimes voters will have trouble researching candidates on the ballot in this election, such as judges, school board members, and other non-partisan races," Broward GOP Chairman George Moraitis stated in the Sun Sentinel.

"The Broward GOP has released our official endorsements online at browardgop.com to help with these questions and more, and I hope you will consider our endorsements before voting," Moraitis continued.

Two members of the executive board, State Committeeman Richard DeNapoli and State Committeewoman Michele Merrell, are up for re-election on the ballot. The local party is barred from making an endorsement in their races per party rules.

After Aug. 18, some candidates will move on to the General Election on Nov. 3, 2020, to face their Democrat opponent while others will have won their race outright.

The Broward GOP is a grassroots organization dedicated to increasing Republican voter turnout to get Republicans elected. It remains committed to re-electing President Donald J. Trump.

Recent efforts by party leadership to succeed in deep blue Broward County are proving to be fruitful.

The Broward GOP saw a 16% increase in Republican voter turnout in Broward County in 2018, compared to 2014 compared to the statewide increase of only 12%.

Also, "fundraising for the local GOP has been exceptionally strong for the last two years due to voter enthusiasm," Jeff Brown, the Broward GOP Treasurer said.

"We're building a robust grassroots movement to save the soul of our country," said Vice Chair Tom Powers. "We're committed to doing what it takes to win."

The Broward GOP is the foundation of Republican Grassroots politics. It enables registered Republicans to participate in party decisions at the local level and is the bedrock from which the GOP reaches out to the community to win elections.

Broward GOP Issues Voter Guide for November 2020 Election
The Broward GOP has researched all races and amendments to be of assistance to voters in the November 3rd election.
Broward GOP - Oct 1, 2020

Support for President Trump Increases in Florida as Broward GOP Postures for 2020
"This puts us in a great position to continue to turn out the Republican vote."
Broward GOP - Jul 18, 2019