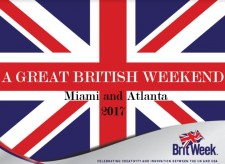 Atlanta, GA , April 27, 2017 (Newswire.com) - After ten highly successful years in Los Angeles, and five in Miami, BritWeek is delighted to announce that Atlanta will be the location of the next Great British Weekend from May 4-6, 2017.

In collaboration with the British Consulate General Atlanta and the UK Department of International Trade, A Great British Weekend is a series of business and cultural events designed to celebrate the thriving relationship between the UK and Georgia.

"With bilateral trade worth around $3.7bn, and some 284 British companies operating in Georgia, such as Intercontinental Hotels Group, SAGE, Worldpay, JCB, Pinewood Studios and Triumph Motorcycles, Atlanta is a perfect location for the BritWeek platform,"

This year’s events include a VIP reception at the British Consulate residence for British and US business and community leaders, networking sessions led by the DIT and BritWeek, a unique documentary screening on the life of Leslie Howard at the Margaret Mitchell House, and the BABC-Georgia 2017 Great British Ball.

“With bilateral trade worth around $3.7bn, and some 284 British companies operating in Georgia, such as Intercontinental Hotels Group, SAGE, Worldpay, JCB, Pinewood Studios and Triumph Motorcycles, Atlanta is a perfect location for the BritWeek platform,” said Jeremy Pilmore-Bedford, British Consul General. “Culturally, there exist strong synergies as well, including a sister city relationship between Atlanta and Newcastle, and the recent NPH Female Founders Mission to Atlanta celebrating female entrepreneurship.”

Justin Jones, BritWeek Director said, “Since launching BritWeek Miami, we have been excited about the opportunity of expanding to another state. We were delighted that the Consul General and DIT teams in Atlanta see the benefit of A Great British Weekend to further enhance the UK’s historic cultural and economic ties with Georgia. Working with a host of new partners such as the British American Business Council of Georgia, the Atlanta History Center, and Soccer in the Streets is sure to make it a great success.”

About the British Consulate General Atlanta
The British Consulate General in Atlanta represents the United Kingdom’s government in Alabama, Georgia, Mississippi, North Carolina, South Carolina and Tennessee. Its services include dealing with a wide range of political, commercial, security and economic questions of interest to the U.K. and Southeastern United States. It also provides consular assistance to British nationals in the region.

About A Great British Weekend

A Great British Weekend highlights the many business and cultural ties between the UK and the US, with a focus on Florida and Georgia.