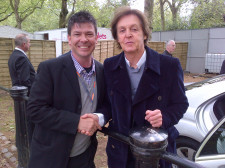 LONDON, September 17, 2021 (Newswire.com) - London born singer/songwriter Michael Armstrong has this last month been enjoying great success on the US charts. Today he received the wonderful news that on next week's New Music Weekly (NMW) Chart, his track 'Each Others Eyes' taken from his current album 'Ojai', has incredibly risen to No. 1 on their Top 40 Indie Chart and No. 17 on the Main Top 40 Chart.

Michael is ahead of Elton John and Billy Eilish and hot on the heels of Ed Sheeran, Justin Beiber, Dua Lipa, Camila Cabello and The Weeknd; in the Secondary Markets that NMW (New Music Weekly) tracks.

The interesting thing about this story is that Michael Armstrong, who resides in Banstead, on the edge of Greater London, did this himself, totally independently, self-funded and without the backing of any record label. He is a 47-year-old father of 3 boys and a talented singer/songwriter/musician who never gave up his 'impossible' childhood dream to succeed in the music biz. He risked everything he had to achieve it. As Michael says, "I'm an overnight success...after 35 years of trying. I have always had self-belief and determination, but even I thought conquering the American charts might be a little out of my reach. I am beyond delighted."

Despite his best attempts to break into the music industry as a young man, Michael spent his 20s and 30s working in the family construction business, with a burning hunger and desire to achieve his dreams that never left him. It was 10 years ago that he gambled it all, closing the firm and making the decision that it was "now or never". It has been a decade of huge highs and crushing lows, buzzing excitement and extreme depression, but his tenacity and belief in himself and his music have persevered, finally bringing him the success that he has so desired and deserved.

Perhaps the best example of Michael's cheeky nature, boldness, and persistence, came in 2012 when he found himself backstage at HM The Queen's Jubilee Concert, Buckingham Palace in 2012.

Surrounded by both musical and actual royalty, mingling with the likes of Elton John, Stevie Wonder, Tom Jones and Princes Charles, William and Harry, Michael managed to find his way onto the stage for the finale alongside his hero Paul McCartney after posing as a member of the Military Wives Choir. He joined the chorus for 'Ob-La-Di, Ob-La-Da' and was introduced to HM The Queen afterwards. Thankfully he was able to escape without being sent to the Tower.

US INDIE MUSIC SINGLES CHART NO.1

Michael Armstrong 'Each Others Eyes'