Bringing the Truth About Drugs to Zurich Youth

Say No to Drugs, Say Yes to Life: Volunteers bring the Truth About Drugs campaign to the streets of Zurich. 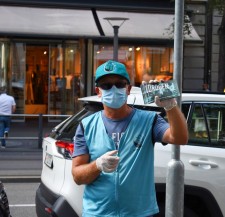 ZURICH, August 7, 2020 (Newswire.com) - Volunteers from the Zurich chapter of Foundation for a Drug-Free World took to the streets this summer to reach youth with their Truth About Drugs campaign.

Prevention is one of the four pillars of Switzerland’s drug-prevention strategy and one of the most viable. Those who avoid experimenting with drugs when they are young are less likely to do so later on.

According to the World Drug Report 2020, an estimated 269 million people internationally consume illegal drugs. Drug markets are becoming increasingly complex, with plant-based substances such as cannabis, cocaine and heroin now joined by hundreds of synthetic drugs, many not under international control, and a rapid rise in the nonmedical use of pharmaceutical drugs.

Drawing on three decades of experience in drug prevention, the Truth About Drugs program effectively communicates to teens and young adults the reality of drug abuse, individually and through mass communication.

Both experience and surveys show that teens and young adults are most likely to listen to their peers. Thus the core message in these booklets is provided by young people—some of whom have gone down the path of addiction and survived to tell the story.

Foundation for a Drug-Free World is a nonprofit, international drug education program supported by the Church of Scientology and Scientologists. The Founder of Scientology L. Ron Hubbard noted the role substance abuse plays in the disintegration of the social fabric, stating, “Research has demonstrated that the single most destructive element present in our current culture is drugs.” The Foundation was formed in 2006 to serve as the primary distributor of educational materials and to develop new materials to meet the challenge of continually changing drug trends.

Tags: Church of Scientology, Foundation for a Drug-Free World, Truth About Drugs, Zurich