Foundation for a Drug-Free World joins forces with the New Mexico National Guard Joint Counterdrug Task Force to educate youth and adults about illicit drug use. 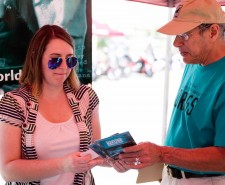 Youth Against Drug Abuse, the Albuquerque chapter of Foundation for a Drug-Free World, brought its Truth About Drugs program to the New Mexico National Guard Armory drop-off point to educate those participating about the dangers of drugs — both prescription and illegal drugs.

The Youth Against Drug Abuse chapter director spoke on the topic “How to Save A Life Tonight — Talking to Your Friends and Family About Drugs.” It was based on the Foundation for a Drug-Free World’s award-winning Truth About Drugs: Real People, Real Stories documentary film that features the stories of former addicts. These are men and women who have “been there” and are now passing on what they have learned so others can avoid going down the same path. Several of the foundation’s “They Said . . . They Lied” public service announcements were shown. They make the point that the subject of drugs is riddled with false information that is often spread to youth.

Drug abuse is an urgent problem in New Mexico. A nationwide survey of drug abuse among New Mexico’s high school students found some of the highest rates across a broad range of illegal substances. New Mexico youth ranked second-highest for cocaine and ecstasy use, fifth-highest for methamphetamine and eighth-highest for heroin.

New Mexico’s drug overdose death rate, one of the worst in the nation for recent decades and more than tripled since 1990, has finally seen a decline over the past three years but still ranks at number 15.

The Foundation for a Drug-Free World produces a full array of drug education materials. In addition to The Truth About Drugs: Real People, Real Stories DVD and public service announcements, there are also 14 youth-friendly booklets covering most commonly abused drugs including synthetic drugs and alcohol. A complete Truth About Drugs Educator Kit was available for those wishing to provide drug education lectures.

All Truth About Drugs materials including the Educator’s Kit can be ordered online at the foundation’s website - www.drugfreeworld.org. The documentary DVD and public service announcements can be watched online there and all drug education booklets can be read or downloaded from the site.

The website also features free online lessons about each drug featured in the program so anyone may educate themselves on this vital subject.

The Church of Scientology and its members support the Foundation for a Drug-Free World, a secular nonprofit corporation that empowers youth and adults with factual information about drugs so they can make informed decisions to live drug-free. The Foundation’s Truth About Drugs campaign is one of the world’s largest nongovernmental drug education and prevention initiatives. As shown on a program on the Scientology TV Network, the support of the church makes it possible for the foundation to provide drug education booklets, videos and educator guides free of charge to teachers, mentors and civic and community leaders.

Join the Scientology Network in Celebration of World Literacy Day
Literacy is essential for work and prosperity. Illiteracy holds the individual back and limits their choices in every aspect of life. The Scientology Network's Voices for Humanity original series shares the stories of humanitarians who are dedicated to addressing this vital issue.
Scientology - Sep 8, 2021
Newswire