Bringing the Truth About Drugs to Bolivia

A Venezuelan drug-prevention activist and a Bolivian mayor join forces to counter drug abuse in one of the world's most rapidly growing city.

SANTA CRUZ, Bolivia, March 8, 2018 (Newswire.com) - Not too long ago, Santa Cruz de la Sierra was little more than an agrarian outpost in Bolivia’s Tropical Lowlands. But its transformation into one of the world’s fastest-growing cities has brought with it certain liabilities, including drugs.

As described by one nonprofit, “Bolivia now sits alongside the second biggest consumer of illegal drugs in the world: Brazil” and it borders with “the world’s principal producer of cocaine, Peru, and South America’s primary producer of marijuana, Paraguay.” The country is “literally at the heart of South America’s illegal narcotics trade.”

Enter Mario Chirinos, executive director of the Venezuela chapter of Foundation for a Drug-Free World. In 2015, Chirinos was awarded the Freedom Medal of the International Association of Scientologists for igniting a national drug prevention movement in his native Venezuela, reducing school drug use by 40 percent. That year, he also established the Foundation in Honduras through a partnership with that country’s First Lady. One year later, he helped to mobilize more than 5,500 volunteers to distribute 1 million Truth About Drugs booklets at the 2016 Rio Olympics.

Now in Bolivia, Chirinos is working with the mayor of Santa Cruz to bring the Foundation’s Truth About Drugs initiative to the people of his city. Since arriving, Chirinos has been interviewed on Bolivizion TV, introducing an estimated 1 million viewers to the Truth About Drugs program. The mayor of Santa Cruz has opened a Drug-Free World office for his city. Chirinos began training teams of educators as drug education specialists for the city’s schools. And he activated members of an air force squadron to carry out drug prevention. They will now use the Truth About Drugs materials in their community activities.

Drug-Free World partners with civic and nongovernmental organizations including more than 1,200 police departments in the United States. Through its worldwide network of volunteers and partnerships, it has distributed 80 million copies of Truth About Drugs booklets since their first published in 2006. 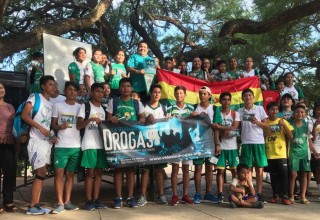 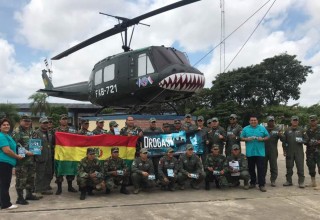