BERLIN, Conn., November 3, 2022 (Newswire.com) - Bright Feeds, a New England-based green startup, opened its first food waste processing plant in Berlin, Connecticut, last week. Licensed to process 450 tons of food waste per day for the next 10 years, the plant is positioned to fill a waste processing gap left by the July 2022 closure of the MIRA plant in nearby Hartford.

"With Bright Feeds here, we have a bright future in Connecticut," says Katie Dykes, Commissioner of the Connecticut Department of Energy and Environmental Protection (DEEP). "I'm excited about what this could mean, not just for Berlin, but for helping Connecticut solve this waste disposal crisis in a really exciting way."

Bright Feeds' 25,000-square-foot plant uses cutting-edge artificial intelligence and drying technology to convert unwanted food into an all-natural, nutritious soy and corn substitute for animal feed. Bright Feeds developed its proprietary drying technology with engineers at Boston College and Worcester Polytechnic Institute. It uses best-in-class technology sourced from around the globe, and manufactured and assembled in the U.S.

At capacity, the environmental impact of the Berlin plant is equivalent to removing 22,000 cars from the road every year. The carbon-negative process uses less energy and is more scalable than other food waste recycling solutions.

"Not only are we solving the food waste problem, but we're doing it in a way that's more efficient than anything else commercially available," says Bright Feeds President and COO Tim Rassias.

Food waste is a key contributor to climate change:

"41% of what we burn and bury every year is actually valuable material: It's food scraps, it's yard waste, it's all kinds of organics that are incredibly valuable and can be repurposed," says Dykes. "The Bright Feeds model is, for the first time, at scale, turning food waste into a food source for animals, which is one of the best uses for organic material under Connecticut's waste hierarchy."

According to the EPA, feeding animals is the top solution for reducing food waste after feeding hungry people.

Thanks to its pioneering technology, Bright Feeds can accept a wider variety of food waste than its competitors: not just dry, grain-based waste, but also vegetables, fruit, and other wet waste.

"We're a one-stop shop for food waste," says CEO Jonathan Fife. "We built our whole process around taking a variety of inputs and producing a consistent, high-quality feed."

Using a variety of food waste enables Bright Feeds to consistently produce a highly nutritious product. Bright Feeds then sells the meal to animal feed manufacturers who use it as an ingredient in their feed.

New England's ongoing waste crisis calls for creative solutions. With shrinking landfill space, higher gas prices, and multiplying tipping fees, businesses and municipalities face increasing challenges on what to do with their trash.

Bright Feeds enables the responsible disposal of unwanted food for a fraction of typical tipping fees.

The Berlin plant is located between I-91 and I-84, near USA Waste's new recycling center and with easy access to New York City and Massachusetts. Bright Feeds also has a collection point in Fitchburg, Massachusetts, and others in the works. The company plans to scale up with additional plants first in New England and then throughout the country.

Bright Feeds is a New England-based green startup solving the food waste crisis by diverting unwanted food from the waste stream and converting it into a high-quality, nutrient-rich animal feed replacement for soy and corn. Using cutting-edge technology developed with engineers at Boston College and Worcester Polytechnic Institute, Bright Feeds has brought food waste processing into the 21st century with an energy-efficient process that is carbon-negative. 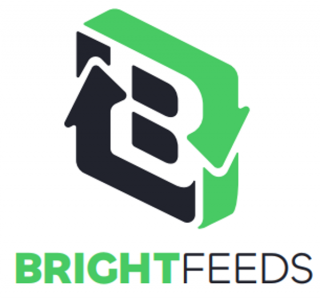