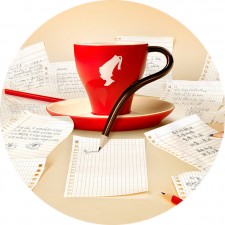 London, United Kingdom, March 17, 2017 (Newswire.com) - More than 80 per cent of people feel disillusioned by the current state of the world, yet four in five believe that exploring their creative side helps improve their outlook on life, according to new research by Julius Meinl. The findings were revealed alongside the launch of Pay With A Poem, a global initiative designed to brew optimism through poetry.

Offering coffee to spark inspiration, the brand invites customers to visit participating locations serving Julius Meinl on World Poetry Day (21st March, 2017). Those who write a poem can use this as currency to receive a complimentary coffee or tea of their choice.

Despite the thinking that creativity increases optimism, the research also uncovered that less than one in ten currently engage with poetry. Further to this, while 43% of respondents admit to having written poetry as a child, over half have not explored it since then.

In response, the Vienna-based coffee roaster is embarking on its biggest and boldest mission yet: to awaken inner poets across the globe, and ultimately, showcase the power poetry has to increase optimism.

Maxime’s ongoing drive to shine a light on the parallels between sociology and art, sees him joining the Pay With A Poem movement.

"Poetry is not a practice, it is a mindstate. The one thing that always remained constant in my work is its trans-practice quality. Designing a tattoo, clothes, publishing or teaching proceed from the same vision, and so does writing and composition. Techniques are means, poetry is the end."

Speaking about the campaign, Julius Meinl’s CEO, Marcel Löffler says: “With a heritage in Viennese coffee house culture – a creative and artistic environment – we have a natural intrigue into how poetry can positively impact our emotions. This research reaffirms our commitment to celebrating poetry – our creative voice is a truly valuable and positive tool.”

“This World Poetry Day, join Pay With A Poem and experience how a simple cup of coffee – paid for by poetry – can inspire creative and poetic moments in life.”

This year’s Pay With A Poem is set to take place in more than 200 new venues than the 2016 initiative. To find out how you can take part, visit facebook.com/JuliusMeinlOfficial and meinlcoffee.com, or watch the Pay With A Poem social experiment here: www.youtube.com/watch?v=jTQG8MM61ng

Julius Meinl is an internationally successful Austrian family company and has been the global ambassador of Vienna’s beloved coffee house culture for more than 150 years. The global success of Julius Meinl is based on traditional values: five generations of coffee expertise, premium-quality products and excellent customer service, values that are no longer a certainty these days. Julius Meinl is a global ambassador for Viennese coffee culture and today inspires people all over the world, just as the coffee house literati did in days gone by. Restaurants and business customers in more than 70 countries rely on Julius Meinl coffee and tea. The company already ranks among the top 3 premium coffee brands in over 40 countries. Julius Meinl is the market leader in hotels, restaurants and cafes in Austria, CEE, Adriatics, Russia and Dubai

About World Poetry Day: World Poetry Day is on 21 March, and was declared by UNESCO (the United Nations Educational, Scientific and Cultural Organization) in 1999. The purpose of the day is to promote the reading, writing, publishing and teaching of poetry throughout the world and, as the UNESCO session declaring the day says, to "give fresh recognition and impetus to national, regional and international poetry movements".