Boomers Parks, operators of eight family entertainment centers around the country, hosted the 9th birthday party for Alan S. Kim, a Critics Choice Award Winner for Oscar-nominated movie "Minari," after saying he wanted to celebrate his birthday at Boomers Parks during an interview on national television. 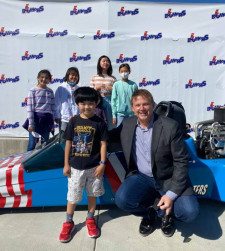 IRVINE, Calif., May 4, 2021 (Newswire.com) - Joined by his parents and a small group of friends, Kim, a huge fan and guest of the Boomers park in Irvine, scaled the rock-climbing wall, drove go-karts, played air hockey and crammed in as much time as he could playing many of the arcade games.

"Unexpectedly, the Minari actor, Alan Kim, gave our Boomers Parks a shoutout on The Tonight Show Starring Jimmy Fallon explaining what Boomers is as he wanted to have his 9th birthday at our family entertainment park," said Tim Murphy, Boomers CEO. "So, we literally did everything in our power to provide Alan a birthday wish come true as he told Jimmy Fallon. Also, we wanted to give Alan a day he would not soon forget with us at our Boomers park in Irvine, California. Alan brought our park great energy and it was wonderful seeing Alan, his friends and family enjoy our park."

Kim, a third-grader, plays the role of David Y in the movie who has a heart condition and finds himself with his first-generation American-Korean family living in rural Arkansas. Actress Yuh-Jung Youn plays Kim's aging and adoring grandmother in the film. She made history as the first Korean to win an Academy Award for Best Supporting Actress. Kim has already made a name for himself with the film after he won the Grand Jury Prize and the Audience Award at the 2020 Sundance Film Festival. Kim's next project is starring in Latchkey Kids, an independent film due out later this year.

Boomers is open 50% capacity and has implemented an unprecedented set of safety protocols to exceed state and local requirements. Murphy said Boomers Parks are creating an industry standard to ensure team members and guests, like the Kim family, are protected. The company has shared a series of safety videos on their websites detailing extraordinary efforts to sanitize from the time guests arrive until they leave. All team members receive training and daily health and safety briefings.

About The Ascendant Group

Built on referrals and inspired by trust since its creation in 2004, Ascendant Group has worked with the world's leading CEOs and executives ranging from fortune 500 companies, INC 5000 fastest growing businesses, & high performing individual brands.