Boomcast: A New Social Platform Creating an Army for Change

Boomcast: the new social platform for change. Individuals and top organizations have come together to make a positive change in the world. 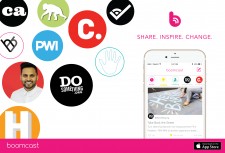 It can be discouraging when headline after headline shows what is wrong in the world. A staggering 73% of millennials do not see news media’s impact as positive (Pew Research) and British psychologist Dr. Graham Davey suggests negative media can have long lasting psychological effects including stress, anxiety, depression, and even PTSD (Huffington Post).  In contrast, Boomcast provides a place for individuals to feel inspired by positive news and authentic stories, and to take action on some of the world’s biggest problems. “Boomcast brings social action to the forefront and empowers its users to make a tangible difference," said DoSomething’s Marissa Ranalli about the new social media platform.

Jay Shetty said during his recent  HuffPost Rise Live video about “Becoming a Changemaker,” “It’s about positive vibes, pushing out positive media, and helping us connect with positivity in our lives.” The more thoughtful leaders, hopeful people, and game-changing organizations that come together on Boomcast, the more we can start to shift the mindset of others. By opening minds and inspiring compassion, together we can change the world!

Boomcast is backed by various angel investors including an early Snapchat investor.

The social platform for social change. Individuals and organizations are coming together to make a positive difference!