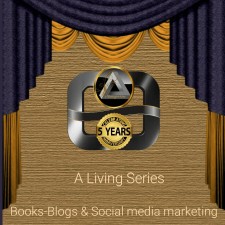 To mark this occasion, A Living Series features an ALS Wall of Fame highlighting 'The most eminent 40 people on the web' whose contribution to the society and world is remarkable!

View the link to read: https://alivingseriesblog.wordpress.com/2017/12/09/40-gems-a-living-series-wall-of-fame

A Living Series Wall of Fame

To celebrate the completion of a half-decade writing journey, A Living Series has made the platform more affordable than ever for a limited time for authors who are looking for promotions. ALS is propelled by the success of its promotions. https://alivingseriespromotions.wordpress.com.

A Living Series has now expanded its offerings for Writers who want to leverage book sales and promotion without breaking the bank. To that end, ALS has created a unique version of its Active Campaign, offering a 50 percent forever discount for the first 25 users to sign up for the promotion.

“We’re really excited to be able to offer the Active Campaign and through this special promotion, more affordably than ever before,” says A Living Series founder Inderjit Kaur. “Now more authors can take advantage of this powerful platform, at a rate that falls within their budget. Even without this discount, A Living Series promotions pricing is a lot less than that of other competitors.”

This special promotion edition of the Active Campaign will provide a unique social media marketing opportunity, in which both subscribers and their friends will be beneficial to attain maximum online visibility.

Founder Inderjit Kaur: “Over the last five years, I’ve achieved what I wanted to achieve with this blog: built an outlet and inspired people with my writings and expressing thoughts on motivation, became a better writer. There have been things I got out of blogging that I didn’t expect: I’ve been invited to give a few talks about inspiration and motivation, which led me to be a published book author in penguin and Notion press, tweets, blogs and met some of the nicest people on here whom I want to thank as a mark of appreciation and celebrating a half-decade of a successful journey of A Living Series.