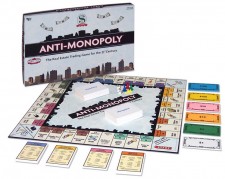 Hoboken, NJ, June 21, 2016 (Newswire.com) - ​Anti-Monopoly Inc. announced today that Mark Anspach has taken the helm as President. He previously served as Vice President of the family game company founded in 1973. William Anspach, who has given the company the benefit of his legal advice on sundry occasions, has assumed the duties of Vice President and Corporate Secretary.

Mark Anspach holds an interdisciplinary social science degree from Harvard. He is based in Europe, currently the biggest market for the company's popular educational board game. William Anspach, a Harvard-trained union lawyer practicing in New York, is an old hand at taking on big business – the theme of the irreverent Anti-Monopoly game.

Mark and William have been a part of the Anti-Monopoly story from the start. As told in Mary Pilon's 2015 bestseller The Monopolists, it was seven-year-old William who asked father Ralph what was wrong with monopolies, giving the San Francisco State University economics professor the idea for a game that would answer that question.

Older brother Mark brainstormed with their father and drew the board and cards for the original game. After it was released in the Bay Area, Mark gained his first sales experience taking Anti-Monopoly around to local toy stores. The game soon went national and, in its latest version, enjoys international success.

“Our father always wanted us to follow in his footsteps,” said Mark Anspach, paying tribute to the company's founder and past president. “His determination and tenacity are an inspiration to William and me as we look forward to growing the business in the future.”

Anti-Monopoly is a real estate trading game with a twist. Players choose free enterprise or monopoly, then play under different rules. Competitors charge fair market value while monopolists take over whole neighborhoods and jack up rents. In real life, monopolists have an unfair advantage. But in Anti-Monopoly, competitors have a fair shot at coming out on top.

For more information about Anti-Monopoly, please visit our website:

Anti-Monopoly is a trademark owned by Hasbro, Inc., and is used pursuant to a license.