FairPlay, a blockchain casino that uses Ethereum smart contracts, offers its players checking any gaming data in the blockchain and be sure to have fair games. FairPlay is based on a blockchain platform TruePlay that provides all tools necessary for transparent transactions.

BELIZE CITY, Belize, May 23, 2019 (Newswire.com) - A team behind FairPlay, a blockchain-based casino that operates under Curacao gaming license, has announced its full integration with a blockchain platform TruePlay and is ready to hit the market. FairPlay becomes one of the very few world’s casinos that are running on blockchain and offer players fair games and transparent payouts.

While players can top up their crypto wallet on FairPlay with Bitcoin and Ethereum, only TPLAY tokens are acceptable as bets in games. TPLAY is an ERC-20 token developed by TruePlay platform as a secure token for gaming transactions that can be easily saved and tracked in the blockchain. As the FairPlay website informs, 1000 TPLAY tokens are equal to 1 Ethereum.

FairPlay representatives believe that the changes in Bitcoin price have nothing to do with the gambling stats: “For crypto casinos, it is vital that digital assets are popular and used in everyday life. The changes in rate don’t affect our traffic.”

FairPlay is known for its honesty control based on blockchain. This model ensures games’ rates as all gaming data is published to the blockchain and cannot be edited or removed. All stats are publicly available and can be checked in a blockchain explorer. Users can see the sum of bets, winnings, and losses and calculate the payout percentage. To avoid the hassle and save time, FairPlay publishes the payout percentage on the website. FairPlay is running on TruePlay, a blockchain platform for gambling projects, using its technologies to store all gaming stats in blockchain, and providing users with TruePlay crypto wallet and gaming token for making bets.

To attract more new users and expand the audience, FairPlay.io offers bonuses for deposits increasing the bonus with each next deposit. It should be mentioned that FairPlay holds no limits for a minimum deposit which makes it possible to test out the gaming platform with ease. The bonus varies from 75% to 200% and can be used for making bets in games. As of now, the website is available in English and Russian, the support team works 24/7 and assists via emails, online chats, popular messengers (WhatsApp, Telegram) and also accepts phone calls.

FairPlay is a blockchain-based online casino that publishes all gaming stats to the smart contracts and guarantees fair games and transparent payouts. FairPlay accepts Bitcoin and Ethereum as a currency and provides games of the world's top publishers: NetEnt, Microgaming, Playson, and more.​ 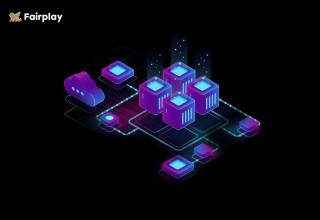 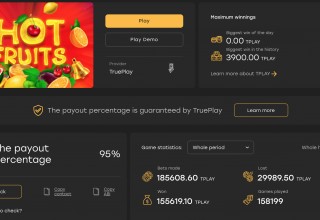