On the first anniversary of the opening of the Scientology Information Center and six humanitarian centers in downtown Clearwater, the Church of Scientology to host a block party to celebrate a year of progress, working with the community in Clearwater and throughout Tampa Bay to address vital community issues. 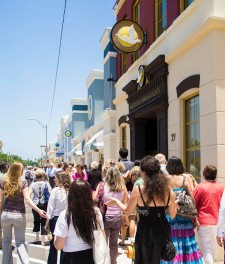 Beginning at 5:00 p.m. on Cleveland Street between Garden and Ft. Harrison avenues and on Waterson Avenue from Cleveland to Hendricks Streets, guests are invited to enjoy the music, games and prizes. Admission is free.

Clearwater is known as the spiritual headquarters of the Church of Scientology, and to answer questions about the religion for residents and those visiting the city, the Church opened the doors to its new information center July 11, 2015, along with six distinct facilities dedicated to the local advancement of Scientology-affiliated global humanitarian initiatives.

The Information Center has helped answer the question, “What is Scientology?” for thousands of visitors with its information displays containing some 300 documentary videos. The Center also hosts concerts, seminars and meetings and makes its conference facilities available to like-minded groups to plan and coordinate action to better the Clearwater community.

The Scientology religion was founded by humanitarian and philosopher, L. Ron Hubbard. The first Church of Scientology was formed in the United States in 1954 and the religion has expanded to more than 11,000 Churches, Missions and affiliated groups in 167 nations.