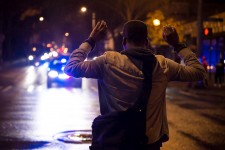 NEW YORK, June 17, 2020 (Newswire.com) -  Barely a month after the killing of George Floyd by Minnesota Police, a new victim, Rayshard Brooks, was killed in a Wendy's parking lot by an Atlanta police officer. The officer has since been fired but the family is finding it hard to receive this as a token of justice for Rayshard's death. "It has to stop," says Black Lives Action Project, a group formed to bring action to combat racism.

Black Lives Action Project is a group formed out of the George Floyd protests with a mission to create action-oriented solutions to bring measurable justice to racism.

The Group has launched a Change.org petition called "Hands Up, Don't Shoot" to bring checks and balances to what they call an "unjust law enforcement system at the local level." It intends to make it a federal crime for police to senselessly kill civilians.

The Group believes that the petition is a "legislative power move," as police currently have nothing to fear when they kill civilians within their own jurisdiction. Many of them believe that their peers who work within the police department, local court and legal system will not prosecute them to the fullest extent. The casual behavior of the police officer who knelt on George Floyd's neck, hands in pockets, is a testament to this.

Black Lives Action Project believes that every civilian life in the United States is at risk. Oversight of policing by the police force which believes they are the ultimate authority in their own local jurisdiction is simply corrupt.

Holding police federally accountable will remove the possibility of preferential treatment that may be given to law enforcement agents who are, in many cases, too familiar with their own jurisdictions. Checks and balances are compromised at this point and need to be addressed.

The passing of such a law will be a historical milestone for the United States and a great achievement for members of government who can quickly champion it. The law will set the tone for ending the worldwide civilian unrest.

The law will also give other nations who have been affected a model that can be used to bring back normalcy to society.

Black Americans are crying out "No Justice, No Peace" and that "Black Lives Matter". They have been joined by the vast amounts of White Americans and other citizens who also see the inequality and injustice as a threat to humankind.

We ask that every American sign this petition to bring law to an unfair system that has been overlooked for centuries. http://Change.org/HandsUpDontShoot