Bitfi to Include One of World's Longest, Fastest and Most Secure UTXO Blockchains in Existence, DigiByte (DGB), to Wallet Ecosystem 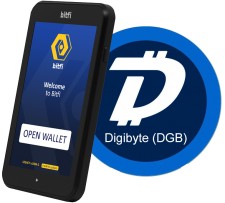 ASHEVILLE, N.C., June 4, 2019 (Newswire.com) - ​​​​​Bitfi announced today that it will be adding support for DigiByte (DGB) and contributing to its global adoption. The Bitfi core team believes that DigiByte (DGB) with its battle-tested, multi-layered security approach and 15-second block speed (40x faster than Bitcoin) is the most important public blockchain following Bitcoin (BTC) and is a critical payment gateway and value protection system.

“It is difficult for the average investor to navigate a confusing array of blockchains and cryptocurrencies, many of which are driven by hype, fancy white papers or high-tech features which have yet to materialize. Teams promise amazing new features but rarely deliver,” said Bitfi's director of business development Candice Nelms. “DigiByte was created in 2014 by a true visionary, Jared Tate, and has been able to achieve all the features needed for a robust and reliable currency and an extremely secure blockchain.”

Nelms continued, “As a currency, DigiByte (DGB) is simply unmatched and as a network, extraordinarily stable. We feel that it is important to have secondary reliable blockchains and alternate payment rails to protect Bitcoin and investors in the event of attack. This is that investment-grade cryptocurrency opportunity and that investment needs to be properly secured.”

Bitfi feels that DigiByte is distinguished for the following reasons:

• DigiByte has never had an ICO and never had any large pre-mine (0.25 percent was used in 2014 for developer bounties for first mobile and mac wallets, mining pools and block explorer and 0.25 percent was given away to thousands of non-miner users for increased adoption before DGB was ever listed on an exchange). As a result, it is widely distributed and there is no concentrated supply held by any entity.

• It is one of the most decentralized blockchains following Bitcoin with well over 275,000 full node downloads since 2017. Verifiable from GitHub release stats: http://www.somsubhra.com/github-release-stats/?username=digibyte&repository=digibyte.

• It has extremely high protection from 51% attacks by utilizing five different mining algorithms simultaneously (SHA256, Scrypt, Skein, Groestl and Qubit). Each algorithm receives 20 percent of the block rewards and has automatic difficulty adjustment.

• DigiByte can scale on chain to well over 500 transactions per second and transactions are fast with 15-second blocks.

With five years of cutting-edge innovation tethered to a strong focus on blockchain security and stability, DigiByte (DGB) is a currency that Bitfi believes will have massive ongoing growth and development. The integration into the Bitfi Hardware Wallet will allow investors to secure larger amounts without concern for safety. Bitfi Hardware Wallet has been vetted by DigiByte Core developers and is the official hardware wallet for DigiByte.

Bitfi is a global payments technology company that is developing new technology for holding and securing digital assets to surpass cold storage. Its wallet does not store private keys, making it the world's only wallet that cannot be seized. www.bitfi.com