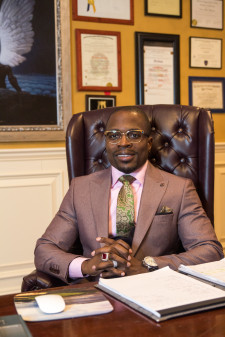 NEW YORK, May 7, 2021 (Newswire.com) -  On Wednesday, May 5, 2021, New York Governor Andrew Cuomo signed a bill to restore felons' right to vote after their release, and Brooklyn Borough President Candidate, Bishop Lamor Miller Whitehead reacts with pure joy, as people on parole in the state of New York are now eligible to vote as soon as they leave prison

As the law goes into effect immediately, Whitehead states, "The signing of this bill is dear to me since I was once falsely convicted and arrested for a crime I did not commit, so I commend Andrew Cuomo for allowing this to happen. During that challenging time, I met a lot of black and brown people who were stripped of their right to vote." Bishop Lamor Miller Whitehead was sentenced during one point of his life to 11 and 1/3 - 34 years in prison.

Born and raised in Brooklyn, Whitehead pushes to abolish systemic racism within several facets of New York City Government. "I will fight to reform New York's criminal justice system by erasing Broken Windows of policing. I will support expanding bail reform—as 95% of the people jailed on Rikers Island are black and brown and often too poor to make bail. Developing reentry programs is also at the top of my list of priorities once elected as Brooklyn Borough President," states Bishop Lamor Miller Whitehead, who is the only candidate with a plan to fight systemic racism. "Also, I dedicate my campaign plan for the borough of Brooklyn to Shirley Chisholm, the first black woman elected to the United States Congress, representing New York's 12th congressional district, a district centered on Bedford-Stuyvesant.

Outside of running for Brooklyn Borough President, Bishop Lamor Miller Whitehead is the pastor of Leaders of Tomorrow International Ministries (LOTIM) with locations in Brooklyn, New York and Atlanta, Georgia. With a mission developed to engage and assist members into developing their very own relationship with God, Bishop Whitehead sees fit to expand into the masses to take office in order to be the voice to his peers of prominence in Brooklyn.

With less than 60 days away from the election on Tuesday, June 22, 2021, Whitehead deems it necessary to educate felons of their rights in the wake of their first opportunity to get out and exercise his/her right to vote.