IPAs and Stouts among the favorite styles of beer, while Lagers rank poorly 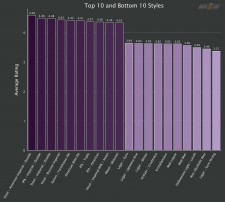 Among the top styles of beer were American Imperial Stouts, Imperial Indian Pale Ales, and Triple IPAs. These styles of beer typically have an ABV around 13% on average.

Lighter and sweeter beers, such as Hefeweizens and Lagers, fell in the bottom of the rankings. These styles of beer have an average ABV from 5 to 7%.

The study also looked at other aspects of beer including the relationship between ABV and IBU, which style of beer was drank most often, and what the average beer looks like.

For a full list of findings, view the full report online. For questions about the data used in the study or a comment on the findings, contact Derek Gaughan at contact@brewfuse.com.

BrewFuse is a website dedicated to covering all things beer from a science-driven perspective.