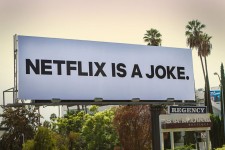 CANNES, France, August 27, 2018 (Newswire.com) - At the 2018 Cannes Lion International Festival of Creativity, Battery was awarded a Film Cannes Lion for their Netflix is a Joke campaign.

“What an incredible honor. A big congratulations to the team and an even bigger thank you to our very brave clients at Netflix,” said Philip Khosid, chief creative officer and co-founder of Battery.

The Cannes Lions are among the most well-established and coveted awards within the creative and marketing communications industry and they received over 32,000 entries from 90 countries in this past year alone.

This honor comes on the heels of a rewarding year for Battery, having been recognized as one of Ad Age’s Small Agencies of the Year in 2018 and one of the top 20 Fastest Growing Private Companies by the Los Angeles Business Journal. Battery has also been honored with industry awards this year including the Inc. 5000, D&AD Association, Ad Age Campaign of the Year, PromaxGames and The One Show as well as being awarded by ThinkLA as their Boutique Agency of the Year, 2018.

Battery’s mission is to create advertising that’s as sought-after as entertainment. Honored as an Ad Age Small Agency of the Year in 2015, 2016 and 2018 as well as being recognized as a Top 20 Fastest Growing Private Company in LA County in 2016 and 2017, Battery creates global campaigns for such brands as Netflix, AECOM and Activision Blizzard.

Since its first outing in 1954, the Cannes Lions International Festival of Creativity has been bringing the creative communications industry together every year at its one-of-a-kind event in Cannes to learn, network and celebrate. The Lions are the most established and coveted awards for the creative and marketing communications industry. Winning at the festival puts winners among the world’s elite. Our trophies are recognised globally as the ultimate achievement in creativity and we know that winning work from the festival "gives 54% higher ROI than non-creatively awarded work."

Battery is a full-service creative agency located in the heart of Hollywood.

Battery Takes Home 2 Grand Clios at the 2018 Clio Entertainment Awards
Battery is honored for the fourth year in a row at the Clio Entertainment Awards for its 'Netflix is a Joke' advertising campaign.
Battery - Nov 16, 2018
Inc. Magazine Names Battery to Its Annual List of America's Fastest-Growing Private Companies-the Inc. 5000
Battery Ranks No. 967 on the 2018 Inc. 5000 With Three-Year Revenue Growth of 512 Percent
Battery - Aug 15, 2018
Newswire