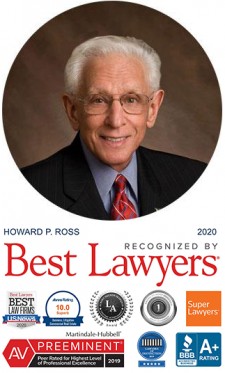 ST. PETERSBURG, Fla., May 3, 2020 (Newswire.com) - Who says that you can’t fight City Hall? In a significant Pinellas County trial court decision last week, Howard Ross of Battaglia, Ross, Dicus & McQuaid, P.A. defeated an unlawful commercial eviction brought by the City of St. Petersburg. The case involved the development rights to an important commercial property in Midtown St. Petersburg that was earmarked for a gas station, convenience store, restaurant, and medical services facility. The development of this property could have provided jobs and important services to underserved citizens of St. Petersburg, but was halted by the City’s lawsuit.

Over two years ago, the St. Petersburg City Council voted to begin legal proceedings to remove our clients from the property even after they had invested significant sums toward the redevelopment of the parcel. After two years of legal battles, Mr. Ross and his small business developer clients were successful in stopping the City’s efforts at trial.

The Case Goes to Trial

The lease required TLM to have commenced initial construction on or before May 1, 2018. The City of St. Petersburg contended that because “vertical construction,” the act of physically constructing the actual building on the site, had not started, TLM had failed to commence initial construction as required by the lease. At the two day trial, the defense presented numerous witnesses that were well versed and qualified as experts in the field of construction. These witnesses consisted of contractors on the actual job site, a former employee of the City of St. Petersburg, and an expert in the area of construction generally. Witnesses testified that they performed a series of acts which together constituted “initial construction.” These acts included filing a notice of commencement, obtaining a permit for site clearing, applying for a building permit, constructing a silt fence, constructing tree barricades, scraping the site, grubbing the site, and tree removal. It was clear from the testimony of the witnesses that significant funds and resources were deployed toward prepping the site for the installation of the “pad.” All of the defense witnesses concurred that the aforementioned actions by TLM and its contractors qualified as the commencement of initial construction. The general consensus of the trial witnesses was that the word “construction” refers to a series of acts that, in total, result in a finished structure and at the end of the trial the court agreed that the actions taken by Mr. Ross’s client was sufficient.

The judge in the case noted in her opinion that: “the record is clear and the greater weight of the evidence shows that ’initial construction’ in the form of a pending building permit application, grubbing, silt fence installation, tree staking, scraping, and the removal of trees and other vegetation began before the May 1, 2018, deadline. The testimony of the site clearers, licensed general contractors, the City’s own employees and experts in the field all establish that these activities are part of the construction process. . .”

Near the conclusion of the trial, a principal of TLM testified that he grew up in a neighborhood nearby the area where the development site was located. He testified that it was his vision to bring prosperity and jobs to his community and that it was his goal to be an example to children in the area as to what they can accomplish if they work hard. Howard Ross and the law firm of Battaglia, Ross, Dicus & McQuaid, P.A. has worked tirelessly to ensure that this man receives the opportunity to positively impact his community, and the court ruling in this case was certainly a step in the direction toward making this dream a reality.

How Will This Case Affect Future Development in St. Petersburg?

This case will have a significant impact on the future development of the parcel and how the City handles their development deals. The extent of the repercussions to the City for their unfounded lawsuit is yet to be determined. It is expected that the parties will explore a settlement given the court’s decision.

Mr. Ross was proud to have been able to deliver this victory for his clients. Mr. Ross just celebrated his 56th year as a member of the Florida Bar and is still trying cases….and winning. Mr. Ross devotes his law practice to business and real estate transactions and litigation. His passion is helping his clients by putting their needs first. Mr. Ross has been a mentor to dozens of lawyers in the legal community over the years. He has been an important figure in the St. Petersburg Bar Association, The Chamber of Commerce, and in the local community for decades and is still going strong.

Mr. Ross is the Chairman of the Board at Battaglia, Ross, Dicus & McQuaid P.A. in St. Petersburg, FL. The Firm was established in 1958 and for over 60 years has been providing help to people and businesses in the Tampa Bay, Florida area. The Firm has multiple areas of practice in addition to business litigation including personal injury, estate planning and probate, real estate, criminal defense, appeals, insurance disputes, and general civil litigation.  The Firm has been ranked by US News & World Reports as a Tier 1 law firm and its lawyers have all received significant levels of achievement and recognition in the legal community.