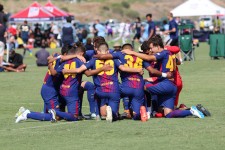 Barca Residency Academy U17s have surpassed all expectations during the regular season and are making major waves during the USSDA Playoffs.

The game started lively on both sides, with Barca’s Jake LaCava, Cameron Fisher, and Henry Tapper’s combinations resulting in three corner kicks in the first 12 minutes of the game. But in the 26th minute, goalkeeper Luke Pruter got caught off line and a Red Bulls player shot the only goal of the game for the New York team. Barc a tied the game in the final 10 minutes of the first half, with Tapper receiving his second goal of the playoffs. It wasn’t until the 74th minute of the second half when Barca’s Fisher took the game with two goals within a two-minute span.

Luke Pruter made two exceptional saves in the final moments of regulation and Barca Residency Academy defeated the #3 nationally ranked New York Red Bulls 3-1, advancing to the semifinals where they will face the #2 nationally ranked Seattle Sounders on July 8 in Kansas City, Missouri. The game will be played on the Championship Field at the Swope Soccer Village at 2:00 p.m.

Winners from the semifinal game between Barca Residency Academy and the Seattle Sounders will advance to the USSDA Championship game competing against the victor between Atlanta United and Montreal Impact.

For more information, go to www.barcaacademy.com. For press inquiries, contact Mike Marraccini at 941-914-5324 or at mcm@largeinc.com.

Barca Residency Academy is the best place in the United States for elite youth soccer players to develop and perfect their talents both on and off the field. The combination of Grande Sports World’s top-notch academy facilities and staff and FC Barcelona’s world-renowned philosophies, provide a wide range of benefits to players, including instruction in a professional environment from FC Barcelona famed coaches. FC Barcelona coaches provide immersion through the application of FC Barcelona’s world-renowned youth development training methodology and philosophy, establishing values within the players. Additionally, players are given the opportunity to compete in the U.S. Soccer Development Academy (USSDA). With unmatched coaching, Grande Sports World provides an excellent education on campus by Arizona State University and high-quality nutritional programming geared toward getting a young athlete to the next level. Players are also given the opportunity to train with and trial for FC Barcelona in Barcelona, Spain. FC Barcelona coaches are on-site year-round and train players and campers. Barca Academy coaching staff are recognized nationally and internationally for their professional playing and coaching careers at the highest levels collegiately, professionally, and internationally. With more than 135 Grande Sports World employees, and exceptional top-level coaching staff, there are numerous dedicated professionals that enable and support the student-athletes in helping them achieve and maintain elite levels of performance. Barca Residency Academy is focused on the athlete’s development physically, mentally, nutritionally, academically, and personally. For more information, go to www.barcaacademy.com.