Bakhshish Singh Sandhu, MD's New Book 'PUNJAB: A Tale of State Terrorism, Persecution, Econocide, and Genocide' is a Historic Look at the Occupation of Punjab

The recent release "PUNJAB: A Tale of State Terrorism, Persecution, Econocide, and Genocide" from Newman Springs Publishing author Bakhshish Singh Sandhu, MD, is a dive into the occupation and colonization of Punjab by India since 1947 with the subjugation and persecution of Sikhs. 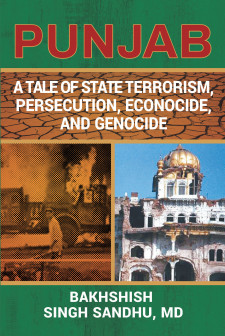 Sandhu writes, "Ever since the creation of the country of India by the partition of the Indian subcontinent on August 15, 1947, by dividing it into Hindu-dominant India and Muslim-dominant Pakistan, the erstwhile country of Punjab (now Indian-Punjab) has been colonized by India. The dividing line of partition passed through the middle of Punjab, leaving a large number of Sikh institutions of significance and highly fertile land in Pakistan Punjab. A once self-governing sovereign, Sikh Empire (Sikh state) was occupied and subjugated first by The East India Company and then the British Raj. In 1947, it was handed over to the newly independent India. The promises of self-governance and autonomy made by the leaders of the Indian Congress Party during the struggle for independence of India from the British have been broken. The Sikh state remains occupied and colonized."

Published by Newman Springs Publishing, Bakhshish Singh Sandhu, MD's, enlightening book gives readers a well-researched look at what really happened in the Indian Punjab after 1947. After the Indian subcontinent was split into India and Pakistan, the country of Punjab ceased to exist. This opened the Sikh people to subjugation, domination, and exploitation. Their resources and land are being exploited, along with the attacks on their national, religious, linguistic, and cultural identities.

Sandhu shows readers the effects that the carving up of Punjab's territory has had by making it an ineffective state. This event has led to "the diversion of its key economic resources, the denial of religious freedom, the violation of fundamental civil and political rights of Sikhs, and the regular pogroms on Sikh communities and holy sites across India." By the end of this book, readers will be able to understand the Sikh struggle for freedom, justice, and the re-establishment of the sovereignty of Punjab.

Readers who wish to experience this interesting work can purchase "PUNJAB: A Tale of State Terrorism, Persecution, Econocide, and Genocide" at bookstores everywhere, or online at the Apple iBooks Store, Amazon, or Barnes & Noble.

Author Al Borges' New Book 'Deny of the Tiger' is the Autobiographical Coaching Career of the Author When He Worked With The Auburn Tigers
Recent release "Deny of the Tiger" from Newman Springs Publishing author Al Borges is the author recounting his time with The Auburn Tigers and the highs and lows accomplished there.
Newman Springs Publishing - Nov 4, 2022

Authors Joanne M. Ebersole and Linda Mastromonaco Harris's New Book 'Killing You Feels So Good' Follows an NYPD Detective as She Investigates a Gripping Murder Case
Recent release "Killing You Feels So Good" from Newman Springs Publishing authors Joanne M. Ebersole and Linda Mastromonaco Harris follows Jessie Dalton, an NYPD Homicide Detective who finds herself leading the investigation into a series of murders targeting the city's homeless population. Meanwhile, she must deal with her cousin's dark secret and family drama before another victim is killed.
Newman Springs Publishing - Nov 4, 2022