"Shake It" shines a spotlight on the rising star's rapping and dancing skills as she makes a name for herself in the entertainment industry. 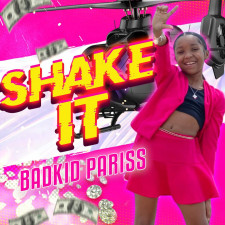 ATLANTA, October 4, 2022 (Newswire.com) - While many 11-year-olds are hanging out with friends and watching their favorite YouTubers or singers and dreaming about making it big in the industry, Paris Gilliam is turning these dreams into action.

Under the stage name Bad Kid Pariss, the 11-year-old young actor, influencer, rapper, and YouTuber dropped her latest song and video, "Shake It," to Apple Music and Spotify. Her latest effort adds further proof of her talents to a portfolio of work already attracting attention for her rapping skills and contagious energy.

And "Shake It" isn't only catching the attention of Bad Kid Pariss' fans across her social media channels. She has the backing of some big names in the industry who are eagerly sharing her music and promoting the young dynamo's career.

The rising star has gained a growing legion of fans as part of FunnyMike Ent's group of young, dynamic stars known as the BadKids. With the backing of FunnyMike's artist development engine behind her, Bad Kid Pariss has seen her YouTube stock rising, her social media followers exploding, and her music career skyrocketing, including multiple song and video releases over the past year.

"I had so much fun recording and releasing my new song 'Shake It' and its video," said Bad Kid Pariss. "My goal in everything I do is to get to the top, and I've got a great team supporting me. I want to thank FunnyMike for helping shape my career as I make my way to the top, as well as the director of the 'Shake It' video Mr. Singleton."

"Shake It" is available on Apple Music, Spotify, and Bad Kid Pariss' YouTube channel. To learn more about BadKid Pariss, visit https://www.badkidparis.com/ and follow her on Instagram.