Thirty cake artists from around the globe come together to bring you a blast from the past through sweet edible art! 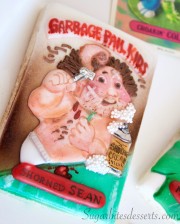 Worldwide, March 10, 2016 (Newswire.com) - In 2015, a group of talented sugar artist gathered via Facebook to discuss a unique project intended to pay homage to the 80s. Our collaboration, Back to the 80’s Sugar Love, will formally launch on #throwbackthursday, Thursday, March 10.  It will be featured on Facebook® https://www.facebook.com/Backtothe80ssugarlove/?ref=hl Instagram®  and Twitter® featuring 30 sugar artists.

The 80’s ushered in a lot first including a revolutionary cable TV show that featured music videos, billed as Music Television which would simply come to exist as MTV. Although it would be duplicated often, it has maintained its furor as a true original.

It wouldn’t be hard to believe that the 80’s spawned some great musical collaborations. Did you know that the awesome guitar in Michael Jackson’s song ‘Beat It’ was none other than Eddie Van Halen? Rap music formally met Rock-n-Roll through the Run D.M.C/Aerosmith collab simply known as Walk This Way®. As music evolved so did its management. Tipper Gore started the Parents Music Resource Center (PMRC). It is the group responsible for the parental advisory stickers that would adorn albums, CD’s and all other manner of music sold. It is the equivalent of the movie rating system.

Laughable and probably unimaginable now, but computers in the 80s only had about 64 kilobytes of memory. In this era, even the most basic iPod shuffle tramples all over that. Furthermore, the first cell phones weighed close to 20 lbs. Can you imagine lugging those to a staff meeting and secretly playing Words With Friends® during a budget meeting?  Do you remember the days when a hashtag was called a pound sign?

In the 80’s the hair was bigger, the clothes were layered, and chicken McNuggets were the thing to order from McDonalds. The movies ran the gamut and offered such classics as the Breakfast Club, Fast Times at Ridgemont High, Ferris Bueller’s Day Off, and who would dare forget Top Gun, Nightmare on Elm Street, or  ET?

It is for this reason that our group collectively decided to honor the 80’s in sugar. You’ll see everything from the Dukes of Hazzard to Rainbow Bright and Garbage Pail Kids. The artists featured in this collaboration all bring their unique take on each of the pieces being showcased and their experience with sugar range from master/classically trained in the culinary arts, to artists trained in other mediums drawn to the sugar arts to those that love all things sugar and choose to express that love in cake.

One thing is certain, the pieces featured will evoke fond memories while nodding to the past with respect.  Because, lets face it.... the 80's were totally rad!

About Back to the 80s Collaboration

A group of cake artists who have come together to collaborate an array of 80's themed cakes.