It's a fact that boys don't read. And they certainly don't write books. Published by Bragi Press, multi-award-winning teenage author E.T. Gunnarsson bucks the trend in his second book "Abandon Us: An Apocalyptic Survival Thriller." 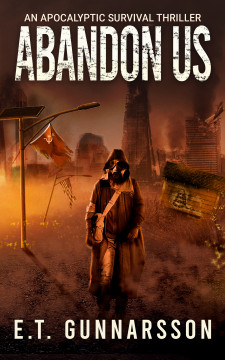 "Author E.T. Gunnarsson's prose is harsh and visceral, a perfect set of tools for depicting the nightmarish vision of the future that he has crafted with great skill." - K.C. Finn for Reader's Favorite

Literacy for Boys reports that mountains of research show that 75% of 9- to 14-year-old boys self-reported they only sometimes or rarely read for pleasure. And they certainly do not write. E.T. Gunnarsson bucks this trend by releasing his second book, Abandon Us, a prequel to E.T.'s debut book Forgive Us, a story readers call "thrilling, brutal, and completely unique."

Stephanie Chapman, Reader's Favorite, says, "Readers who enjoy thrillers set in the future filled with civil unrest and its results will enjoy Abandon Us."

Abandon Us is not a book for the faint of heart. It explores a world rapidly moving toward an apocalypse where multiple events contribute to the downfall of society as we know it.

Twenty-eight-year-old service technician Robert Ashton endures dangerous city streets trying to scrape by. His partner Zilv is his only light in a world enshrouded in polluted darkness.

As society buckles, the pair finds safety in the city's underworld. Working as a smuggler, Robert builds a new criminal life to keep himself and Zilv fed.

But, the battles from the world above seep down into the underground, forcing Robert to return to the surface. In the hellscape of the Third World War, he endures a nightmarish wasteland of violence and death.

When the apocalypse becomes reality just how hard will a man fight to live?

E.T. Gunnarsson translates imagination into words for a living. His debut book, "Forgive Us", was awarded Best Sci-Fi book in the 2021 San Francisco Book Festival and Best Post-Apocalyptic Book in the 2021 Fiction Awards. Abandon Us, the prequel to Forgive Us, is his second book.

Born and raised on a horse-rescue ranch in the Rocky Mountains (9,000 feet altitude!), E.T. now resides in southern Colorado with his dwarfed Cane Corso and his lifelong interest in Norse myth and culture.

A storyteller from an early age, E.T. spent his formative years developing his writing skills on international roleplay sites. He suffers from dysgraphia and cannot write by hand easily. E.T. is a home/online schooler pursuing a marketing degree online.

Audiobook Narrator Craig Bowles is a graduate of The Royal Central School of Speech and Drama in London, where he gained a BA in Acting. His talents are focused on the creation of audiobooks and other voice work. He likes nothing better than getting totally immersed in a great story. The winning combination of superb acting skills and a love of literature allows him to create high-quality audiobooks with his rich, silvery, properly British voice.