Done and done! Multitalented award-winning producer, performance artist and DJ Wade Martin has cemented his place in the dance-music pantheon with the Billboard-topping track "DONE." 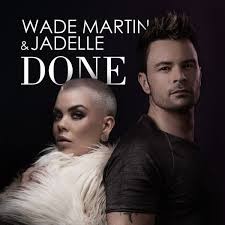 The popular single, which has been played around the country—and world—on prominent dance radio stations, achieved the pinnacle of success recently, hitting No. 1 on Digital Radio Tracking’s Dance Radio Chart for the week of July 23, and No. 10 on Billboard’s International Dance Chart. On August 1, “DONE” unseated Selena Gomez’s “Hands to Myself” for the No. 86 place on Digital Radio Tracking’s Radio Top 100 Chart.

And “DONE” isn’t done yet—the track is poised to continue dominating the charts, thanks to an epic collaboration between the producer/DJ and Norwegian pop star Jadelle (Adele Erichson). “Her voice is amazing, rich and full,” said Martin of his partner on the single. “In addition, her look is very unique; I love her edge. How could I pass on someone like that?”

Jadelle’s soulful voice first graced Norway’s version of The Voice in 2012. The singer has also appeared on other shows in her home country, including Melodi Grand Prix Junior and Idol. This marks her first collaboration with Martin.

Martin recorded and perfected “DONE” in Las Vegas at Wade Martin Studios. A resident of Las Vegas, Martin’s studio is the most technologically advanced and lavish recording studio in the world, complete with a multi-touch screen mixing console, environmental controls, air purifiers, bank vault doors to seal in sound, double-pane windows, a custom ceiling enhanced with stone and more.

“DONE” was released in April 2016 and hit the charts in June.

Wade Martin is an English-born artist, celebrity DJ, music producer and founder of Wade Martin Studios. He’s worked with talented artists/bands including Will.i.am, Icona Pop, Flavor Fav, Wyclef Jean, Katy Cappella, DMX, Nas, R. Kelly, Britney Spears, Millionaires, Carrot Top and The Rolling Stones. In addition, Martin has worked with record labels from Def Jam Recordings to Interscope Records and has guest judged on FOX’s American Idol and The X Factor. The performer designs his own recording studios and oversees them in Phoenix and Las Vegas. For more information on Wade Martin, visit his website, follow along on Facebook and Instagram, and check out his music in iTunes, YouTube, Soundcloud and Spotify.

Artist Management & Marketing, is a firm specializing in complete artistic development, career management, with focus on creative marketing solutions and a proven approach to promotional tactics for creative talent.