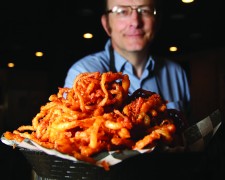 NEW YORK, July 14, 2020 (Newswire.com) - “The Ringmaster,” an award-winning documentary about one man's quest to make a chef and his onion rings world-famous, has sold its US and Canadian distribution rights to 1091. The indie studio, formerly known as The Orchard, has acquired digital rights from Capp Bros. Productions and plans to release the film this fall.

“The Ringmaster” is a Capp Bros. Production in association with Asteroid and Space Metals Recovery. It recently screened at the Oscar-qualifying Doc Edge Festival in New Zealand. The film has won top awards at Festival of Cinema NYC and DOC LA.

1091 previously released the Academy Award® nominated films “Life, Animated” and “Cartel Land.” Emma Manfredi, 1091’s Manager of Film Distribution, states, “We’re excited to bring such a unique, fun story out into the world and can’t wait for people to learn about ‘The Ringmaster’”.

“We are thankful to partner with 1091 to share our documentary across the U.S. and Canada. The entire ‘Ringmaster’ team is grateful for this opportunity and excited for audiences to experience the many layers (like an onion) of this story,” says Capp, Dworsky, and Newberg.

The deal was negotiated by The Film Sales Company’s Andrew Herwitz and Lucas Verga on behalf of the filmmakers.