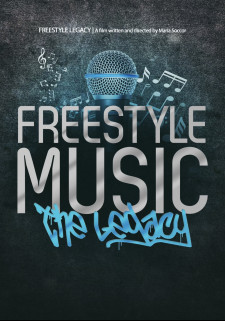 NEW YORK, May 26, 2021 (Newswire.com) - George LaMond, Betty Dee of Sweet Sensation, Judy Torres, Corina, and K7 of TKA will be among the Latin music stars featured in the documentary Freestyle Music: The Legacy, which began production in May 2021 in New York City and Jersey City, New Jersey, under the direction of award-winning filmmaker Maria Soccor.

"The film will personalize how these trailblazing artists came up from the Bronx and Spanish Harlem to create this unique new style of music in the 1980s and '90s which spread around the world," says Soccor, who won 13 awards in the United States and Europe for her 2016 documentary Lords of BSV about the Brukup dance phenomenon in New York. "This is the true story of the artists, producers and DJs who not only were instrumental in the freestyle movement, but have kept the genre alive for more than 35 years."

After beginning as an underground musical genre in New York's Latin neighborhoods and clubs, most famously the Devil's Nest in the Bronx, freestyle (also known as Latin Hip Hop) began to receive global recognition with mainstream success. Sweet Sensation hit the top of the Billboard Dance chart in 1988 with "Never Let You Go."

Corina, who starred with Marc Anthony in the 1990 film East Side Story, reached number six on the Billboard Hot 100 in 1991 with her freestyle hit "Temptation."

TKA is known as the best-selling male freestyle group in history and, as a solo artist, K7 reached number 18 on the Billboard Hot 100 in 1993 with "Come Baby Come."

As a testament to the popularity and longevity of freestyle, Torres was featured in two sold-out freestyle concerts in 2013 at Radio City Music Hall in New York along with TKA, Sa-Fire, Cynthia, and more.

Soccor, who is writing as well as directing Freestyle Music: The Legacy, hopes the film will inspire a museum in the Bronx dedicated to the history of freestyle. The project is receiving enthusiastic support from the music industry.

"The documentary showcases a who's who of artists and other players from an era that forms part of the rich history of popular music in the latter part of the 20th century and remains popular at the present time," says David Jurman, former Columbia Records Senior Director/Dance Music.

For more information, and to schedule interviews with Maria Soccor, contact: